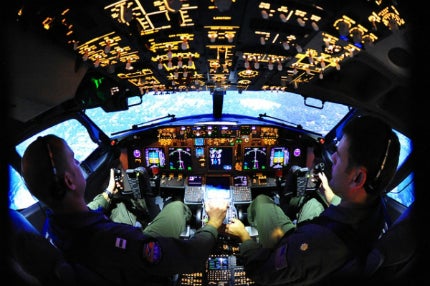 For the first time in 50 years the US Navy’s Maritime Patrol and Reconnaissance Force (MPRF) is transitioning to a new aircraft type. Since 1962, the MPRF has relied on the Lockheed P-3 Orion for Anti-Submarine Warfare (ASW) and Anti-Surface Warfare (ASUW) operations.

Now, the P-3s are reaching the end of their lifecycle after an unprecedented fifty years in service. The replacement will be Boeing‘s P-8A Poseidon, which won the Multi-Mission Maritime Aircraft programme contract in 2004. A total of 117 P-8As will eventually be delivered and are expected to remain in the US Navy for 25 years.

With the exponential growth of unmanned air systems (UAS) and the US military’s focus on unmanned capabilities across all domains, why has the US Navy and Boeing invested so much in the P-8A – a manned platform with operational concepts that date back 50 years?

The answer lies in the P-8’s significant operational capabilities, which includes UAS networked operations, and how Boeing has reduced development and manufacturing costs to meet the US Navy’s stringent demands.

"Since 1962, the MPRF has relied on the Lockheed P-3 Orion for Anti-Submarine Warfare and Anti-Surface Warfare operations."

When it is deployed, the P-8A will be at the centre of a unique network of maritime capabilities which will share data over military standard and internet protocol links.

The aircraft is fitted with Raytheon‘s AN/APY-10 multifunction radar which can provide high-resolution radar images in maritime, littoral and overland environments.

The P-8 will carry anti-ship missiles, depth charges and torpedoes as well as more than 100 deployable sonobuoys for submarine detection. This, along with the on-board systems, will ‘close the kill chain’ and provide crucial data to everyone on the network.

As an adjunct to the P-8A, the US Navy is developing the Broad Area Maritime Surveillance (BAMS) UAS system, which is intended to enhance maritime surveillance capabilities. This will come in the form of the Northrop Grumman MQ-4C ‘Triton’ – the naval version of the popular RQ-4B Global Hawk unmanned aerial vehicle (UAV).

The land-based BAMS system is an autonomous system that provides a persistent ISR capability using a multisensor mission payload.

Working alongside the P-8A, the MQ-4C will be integral to the MPRF Family of Systems airborne ISR recapitalisation strategy. The MQ-4C’s ability to fly at 60,000ft for nearly 30 hours non-stop means the US Navy’s manned platforms can focus on their core missions, namely ASW and ASUW.

The UAV provides continuous data for the P-8A and other networked capabilities across vast portions of the sea. This capability was unthinkable only a few years ago.

"Pairing the MQ-4C Triton unmanned aircraft with the P-8 Poseidon will allow the US Navy to use those systems for a variety of missions that couldn’t be accomplished with a single aircraft type," explains Northrop Grumman MQ-4C Triton programme director Mike Mackey.

"The world’s oceans are very large and require a surveillance system like Triton to be able to monitor large areas for long periods of time. This will allow the P-8 to focus more on specific areas and targets of interest."

The MQ-4C will also feed imagery and other data by satellite into a navy ground segment consisting of a mission control element, a launch and recovery element, and a US Navy-designed Tactical Auxiliary Ground Station.

In June 2013, the Triton made its first flight at Northrop’s Palmdale site in California. The US Navy has ordered a total of 68 aircraft and hopes to achieve IOC in 2016.

Boeing – themselves a manufacturer of a number of UAVs – knows the benefits of using this technology but admits it still cannot compete with a dedicated manned platform in this domain.

"When you look at the payload that the P-8 brings versus any of the unmanned sensors out there – the unmanned are generally limited to one or two sensors – the P-8 brings the full package," says Boeing’s P-8 Poseidon business development manager Bob Gift.

"The UAV providing the additional sensor capability and providing data back, or covering an area that can bring the weapons to bear that the P-8 brings, is an adjunct mission that is valuable and viable. But for the P-8 itself – especially with the focus on the ASW mission – having the sonobuoys, torpedoes and also the sensor operators to evaluate what those systems are providing is suited for a manned role. You can’t un-man everything," Gift adds.

A first for derivative manufacturing

The P-8A – a highly modified Boeing 737 Next Generation (NG) commercial aircraft – benefits from using an existing assembly infrastructure. Unlike many new manned and unmanned programmes for the US military, the development and test phase for the Poseidon has been relatively short and remains on budget and on time.

The aircraft is being built alongside the 737NG in what the company calls the ‘One Boeing’ approach. The ‘In-Line’ process means the P-8 is built like any other 737NG and modifications are made as it moves through the production line. But unlike the NG, the P-8A sports a number of extra antennas, a windowless fuselage and even a bomb bay.

The P-8As fly ‘over the hill’ to Boeing Fields once they are assembled and mission systems are installed and tested. It uses the stronger wing found on the 737-900 so it can carry an array of wing-mounted weaponry and also withstand the steep turns and high rates of descent required for maritime combat flying.

A third production line was opened in 2008 at Boeing’s Renton factory in Washington, specifically for the construction of the P-8A and the P-8I, the derivative destined for the Indian Navy.

Importantly, this process saves money and time and is a significant step-change from older military derivatives such as the KC-135 air tanker and E-3 Sentry – based on the Boeing 707 – which would involve disassembling and modifying the aircraft at dedicated centres.

Currently, the aircraft are being built in increments as part of a series of Low-Rate Initial Production (LRIP) contracts while testing is still carried out. The first LRIP contract for six aircraft – Lot 1 – was awarded to Boeing by the Department of Defense (Dod) in August 2010.

Efficiencies and driving down cost

"The development and test phase for the Poseidon has been relatively short and remains on budget and on time."

According to Boeing, the P-8 programme has created a new business model – using commercial platforms and production capability in military markets – which gives them a competitive advantage. Importantly, the efficiencies achieved on the 737NG line are automatically transferred to the P-8A line, which ultimately drives down cost.

"[The P-8A] programme has exceeded all expectations – when you look at most government and DoD-run programmes they usually start running long, they get kicked down the road," explains Gift.

"They are years late and have huge cost overruns as they are trying to tweak, modify and meet emerging requirements. Whereas for the P-8 programme, it is on schedule and on price, which has enabled us to move forward through the low-rate initial production programme," he adds.

The move to FRP, which is expected at the end of year, is not likely to impact the pace of assembly at Renton. As the P-8A transitions from a development programme to a production programme, many of the engineers who have helped with testing and developing will be reassigned to other projects.

Boeing is hoping to assemble at least one P-8A and P-8I per month with all 37 LRIP aircraft delivered by 2016. But the In-Line process has not been without its problems.

Earlier this year, the Government Accountability Office – an audit body of US Congress – said in its yearly ‘Defence Acquisitions’ report: "The programme encountered minor anomalies and maintenance issues with each of the first five production aircraft during the formal acceptance process. As a result, the Defense Contract Management Agency requested that Boeing conduct more pre-acceptance testing to catch and fix problems earlier."

Deploying the P-8A and future orders

The first squadron to receive the P-8A was the Fleet Replacement Squadron (FRS), VP-30, based in Jacksonville, Florida, which will help train aircrew on the transition from the P-3C Orion.

The FRS, along with the MPRF Weapons School and P-8A Fleet Introduction Team, has facilitated the transitioning of three fleet squadrons: VP-16, VP-5 and VP-45. It is hoped VP-16 will achieve IOC by December and deploy to the Pacific region with a full complement of P-8s.

"The first squadron to receive the P-8A was the Fleet Replacement Squadron (FRS), VP-30, based in Jacksonville, Florida."

"The aircraft has been extremely reliable. The mission systems have performed well and the aircrews are rapidly becoming more adept at flying and employing the aircraft, while the maintenance team is developing new skills required to repair and maintain this modern aircraft," said US Navy Patrol and Reconnaissance Group Commander Lt. Commander Gabe Mauldin.

Since its inaugural flight in 2009, the P-8A has undergone a stringent test programme. Eight test aircraft – six flying and two static – have carried out various test missions, including coordinated training between the P-8A and US Navy guided missile destroyers, deployment of sonobuoys and the successful live test-firing AGM-84D Block IC Harpoon anti-ship missile and MK 54 torpedo.

But complications have arisen as a result of Boeing’s decision to manufacture the aircraft while testing is ongoing.

A DoD Office of Inspector General audit report in June 2013 said Boeing would have to address structural fatigue and overall mission capability concerns that had been raised during the testing phase. As a result, the decision to begin full-rate production (FRP) was delayed and the LRIP Lot 4 contract was awarded instead.

"While there have been many challenges as the P-8A executes test and fleet introduction simultaneously, the P-8A programme continues to be a model of effective planning and execution," Mauldin added.

In July 2013, the P-8A successfully completed its Initial Operational Test and Evaluation – a major milestone for the programme. A US Navy report said the aircraft was ‘operationally effective, operationally suitable, and ready for fleet introduction.’

With other countries also showing an interest in the P-8 Poseidon, estimates suggest production numbers could top 200. Australia has already allocated funding to the P-8 programme and eight units are expected to be ordered to replace their own ageing P-3 fleet.

The United Kingdom’s next Strategic Defence Review is also around the corner, which will kick-start the process of acquiring a new maritime patrol aircraft after the Raf‘s Nimrod MRA4 was cancelled in 2010.

Again, the P-8 Poseidon will be a strong contender, especially with the UK’s current preference for Anglo-American commonality.

The advances Boeing has demonstrated, in the P-8A’s development, manufacture and operational capability, will give the aircraft a good grounding to replicate the P-3 Orion’s success and operational lifespan.

Testing of the X-47B Unmanned Combat Air System demonstrator (UCAS-D) for the US Navy has continued apace this month, with the delta-wing stealth aircraft making a milestone landing on an aircraft carrier.

A large naval contingent at this year’s Defence Security Equipment International proved to be one of the most popular attractions for visitors.

Defense and Civil Spends on Aircrafts in Asia-Pacific: 2016 to 2024

Defense and Civil Spends on Helicopters in Asia-Pacific: 2016 to 2024