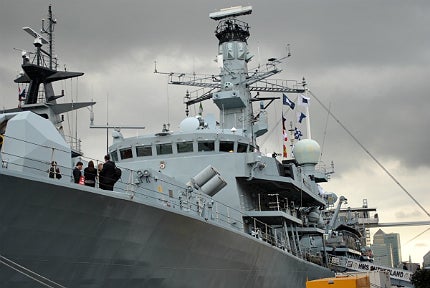 Just about anything you could think of was on display at this year’s DSEI exhibition, from electrical circuit boards to a full-size replica of a Typhoon jet. DSEI brought together 30,000 people from the defence and security industry, in both formal and informal environments, to learn more about customers, markets, products and, importantly, the competition.

Although the ExCel Centre was split into specialised zones for air, naval, land, security, medical and unmanned systems, there was no overarching theme for the entire exhibition. The flow of different zones was broken up by the huge stands belonging to the big defence companies, including BAE Systems, Lockheed Martin and Thales, who dominated the floor space with impressive displays.

Slick presentation, dazzling gadgetry and a well-honed sales pitch was the name of the game here.

The Air Zone was expanded this year, but with DSEI following on the heels of both the Paris and Farnborough Air Shows, it struggled to perform against a strong naval and land presence. The medical and disaster relief zone was a newcomer for 2013 and featured some of the most innovative and engaging technologies and demonstrations of the whole week. Cyber security, as ever, was also high on the DSEI agenda, with prime contractors such as BAE Systems Detica and Dell showing their wares.

With the drawdown from Afghanistan, the growing aversion to conflict in the West and defence cuts still tearing through militaries across the world, DSEI was also a time for the defence community to reflect on the rocky road ahead. There was a slight sense of gloom around the ExCel Centre as companies, knowing their profits were taking a tumble, vied for interest from potential customers. The UK Government came out in force this year in support of the British defence industry – its continued backing for DSEI to be held in the capital is just one part of that.

Surprisingly, despite a strong presence of UK Government ministers, there lacked any high-profile ministerial visits from other countries. It may say something that one of the most notable foreign visitors was Canada’s Minister of State for Western Economic Diversification, who opened the Canada pavilion.

For an international exhibition, the show lacked a varied roster of government speakers, especially from emerging markets like the Gulf, South America and the former-Soviet Bloc. This was likely offset by a large contingent of foreign businessmen and representatives doing business in more discreet ways.

"Slick presentation, dazzling gadgetry and a well-honed sales pitch was the name of the game here."

For several years now the organisers of DSEI have taken advantage of the ExCel Centre’s prime location, just a stone’s throw away from the River Thames. This year, like previous DSEIs, ships of all shapes and sizes from different navies docked next to the centre for visitors to board and explore. For four days the outside area of ExCel resembled a great naval shipyard rather than an exhibition centre.

In a first for DSEI, a South Korean naval destroyer and combat support ship visited the ExCel. The addition of South Korean ships had added significance, as people around the world commemorate the 60th anniversary of the Korean War. The Dutch Navy also sent its brand new Holland-class patrol ship, HNLMS Groningen, fresh from Damen shipbuilders yard in the Netherlands. The crew were eager to meet visitors and take them around the US$150m vessel, which is still going through sea trials before being commissioned.

The German Navy also showed off their newest class of ocean-going corvette, FGS Magdeburg. And of course, a naval display could not be complete without a contribution from the Royal Navy. Offshore patrol vessel HMS Tyne berthed alongside the Type 23 frigate HMS Sutherland, both provided an impressive addition to the visiting naval ships.

The naval theme continued inside as new contracts were announced on the first day by UK defence secretary Philip Hammond. The secretary of state confirmed that defence firm MBDA would produce the Sea Ceptor missile for the Royal Navy’s Type 23 frigates, in a deal worth £250m. The missiles will also be fitted to the new Type 26 Global Combat Ships when they replace the Type 23 in 2020.

Maintaining the British industrial-base theme, the defence secretary stressed that the contract would sustain around 500 UK jobs.

"Maintaining the British industrial-base theme, the defence secretary stressed that the contract would sustain around 500 UK jobs."

Rolls Royce was announced as the contract winner for the Type 26’s gas turbine system, while Rohde & Schwarz won the contract for the integrated communications system. The Minister for Defence Equipment, Philip Dunne, also announced contracts for additional Foxhound vehicles for The British Army, a six-year support contract with Rolls Royce Turbomeca, to maintain Apache and Merlin helicopter engines and an armour development centre in Wales, in cooperation with Kennametal Manufacturing UK.

Smaller contracts were announced at the show but, as with the larger contract announcements, there lacked any key announcements or surprise decisions.

This can be explained either two ways; contract announcements were already made earlier in the year or, in today’s economic climate, customers are less inclined to risk big money purchases, especially purchases that will be followed by the scrutiny that an announcement at DSEI inevitably brings.

Anti-mine operations on land and at sea

"Defence firms are concentrating on what they do best and in the most reliable, cost-efficient way possible."

The threat of mines is an old problem for defence planners both on land and at sea. They are often cheap, require no maintenance and can be left in one location until detonated by enemy forces. Their ability to destroy expensive equipment and cause mass casualties, both soldiers and civilians alike, means militaries are constantly investing in technology which can detect and destroy this threat.

With landmines still littering parts of Africa, the Balkans and the Middle East and sea mines still in use, anti-mine capabilities are more important than ever.

Unmanned anti-mine capabilities were also on show including the Thales ASV Halcyon, mentioned above, and the Atlas Elecktronik ACRIMS (ATLAS Remote Combined Influence Minesweeping System). The growing number of vehicles like Halcyon and ACRIMS demonstrate a growing preference for unmanned maritime vehicles for dangerous missions, such as mine detection. On their dedicated stand, the Royal Navy were keen to show off their REMUS Autonomous Underwater Vehicles, which are used regularly for mine reconnaissance.

Back on land, NIITEK, part of the Chemring Group, displayed its Husky Mine Detection System operated by a number of militaries across the world, including the US Army. Raytheon also displayed its Soteria system, a so-called ‘Stand-Off Improvised Explosive Device Detection and Confirmation Technology’. This innovative technology is mounted on the front of a vehicle (at DSEI a Snatch Land Rover), and uses lasers to locate an IED threat.

Armoured vehicles were also a popular attraction for DSEI visitors with a large selection from various manufacturers. French company Nexter unveiled its Titus – Tactical Infantry Transport and Utility System – vehicle on the second day. The 6×6 armoured vehicle enjoys significant protection from anti-tank mines and IEDs thanks to its V-shaped hull and specially designed ‘modular armoured skin’, which provides level 2 to 4 ballistics protection. Nexter are also pushing the ‘unrivalled modularity’ offered by TITUS with the addition of combat mission kits which means one vehicle can switch roles in a couple of hours.

Overall, DSEI was a less extravagant affair than its predecessors. Although defence firms are still willing to invest in impressive stands, they are less willing to display anything radically new, especially in terms of future products. Instead they are playing it safe while the gloom of low defence spending in Europe and sequestration in the US hangs over proceedings. Defence firms are concentrating on what they do best and in the most reliable, cost-efficient way possible.

Nevertheless, DSEI remains the premier opportunity for those in the security and defence industry to come together and get to know more about competitors, emerging markets and current technology trends.

Ever since Auric Goldfinger uttered the immortal line "No, Mr. Bond, I expect you to die", laser weapons have captured the imagination.