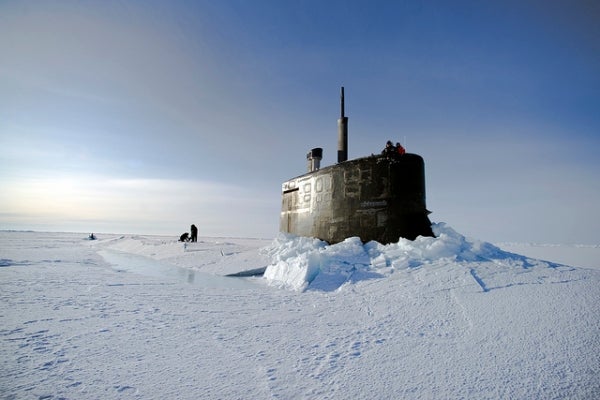 With average winter temperatures hovering around -40°, the Arctic is one of the most inhospitable regions on the planet. At Earth’s most northern point – the North Pole – very few life forms exist both above and below the sea ice. Because of this, any human activity has historically been limited to expeditions by intrepid explorers and scientists.

But this is slowly changing with the onset of climate change. As temperatures increase and Arctic ice melts, humans have been able to explore deeper into the region.

"As temperatures increase and Arctic ice melts, humans have been able to explore deeper into the region."

It is now easier for the commercial sector to explore the region for resources such as oil and gas. The shipping and fishing industries are also exploiting new routes across the once-impassable northern sea routes.

Untapped sources rich with hydrocarbons and new shipping routes can bring significant economic benefits for those countries which border the Arctic – the US, Russia, Canada, Denmark, Norway, Sweden, Finland and Iceland.

But with economic benefits comes greater competition to exploit these new resources, especially in an area where borders and economic zones are blurred.

This all means the area is becoming a greater strategic concern for all the countries concerned.

On 22 November, US Defense Secretary Chuck Hagel announced the Pentagon‘s new Arctic strategy in front of an assembled audience of security experts in Nova Scotia.

"The shipping and fishing industries are also exploiting new routes across the once-impassable northern sea routes."

In his speech to the Halifax International Security Forum, Hagel said the challenge of climate change, while not new to history, is new to the modern world and adds to global instability.

"As the Arctic changes, it creates new opportunities – and new challenges – that will shape the region for decades to come," said Hagel.

The US Department of Defense hopes the Arctic strategy will support President Obama’s National Strategy for the Arctic Region (NSAR), a document which was released earlier this year.

"The Arctic region is peaceful, stable, and free of conflict. The United States and its Arctic allies and partners seek to sustain this spirit of trust, cooperation and collaboration, both internationally and domestically," President Obama wrote in May.

Hagel identified eight points in which the US could accomplish its Arctic objectives, namely:

What does all this mean?

The announcement of the Arctic strategy has not been followed by the unveiling of any new spending initiatives or contract announcements. At the moment at least, it is business as usual at the Pentagon.

In his speech, Hagel admitted that this is a "long-term endeavor" which is likely to take years and decades to implement, not days and months.

"As shifts occur in the strategic landscape, the United States and its allies must be prepared to adjust their defense institutions and capabilities to meet these new challenges," Hagel explained.

"Hagel admitted that this is a "long-term endeavor" which is likely to take years and decades to implement, not days and months."

While the strategy is not getting a budgetary stamp of approval, it avoids ‘premature investments’ and is at least an effort to operationalise the policy guidance contained in the 2013 NASR document, says the Arctic Institute’s senior fellow Kevin Casey.

"The strategy seeks to bolster domain awareness and climate monitoring capabilities that can inform long-term decisions on big ticket investments, such as facilities upgrades or ice-strengthened ships," Casey said.

The strategy also puts onto paper the issue of Arctic cooperation – through bodies such as the Arctic Council – something which has been steadily growing in recent years.

The militaries of the Arctic countries are also co-ordinating far more frequently on exercises which focus on operating in extreme winter conditions. An example of this is the winter exercise Cold Response held in Norway last year, which involved more than 16,000 personnel from 15 nations.

This cooperation could also extend to more informal structures such as the Arctic Security Forces Roundtable (ASFR), which brings together senior military representatives every year to discuss every facet of Arctic security.

"This cooperation could also extend to more informal structures such as the Arctic Security Forces Roundtable (ASFR)."

Scenarios discussed even include the possibility that a cruise ship, using newly opened sea routes, could collide with an iceberg and sink. The challenges of a rescue operation compared with a similar scenario in the Mediterranean or Atlantic are immense.

"There are simple things members at the roundtable can do today to help ourselves deal with this kind of scenario in the future," says Major General Randy Kee, US EuCom director of policy, strategy, partnering and capabilities.

"We can establish regulations for shipping going through the Arctic to maintain domain awareness. We can establish which of us has different capabilities, guiding the roles we will each play."

Many will welcome this renewed focus on a sometimes neglected region. But with the so-called ‘Asia pivot’ and a concentration of capabilities and strategic focus towards the east, questions will be raised as to how serious the US really is about this strategy. What’s the point in focusing on the frozen tundra of the north when China is a more menacing danger, some may ask.

Budget cuts will only serve to strengthen this aversion towards an Arctic strategy. If the strategic environment changes dramatically then this may change, but at present minds will be more focused on Asia than the Arctic.

In just four years, workers at Newport News Shipbuilding in Virginia, US, have built a machine of mammoth proportions.