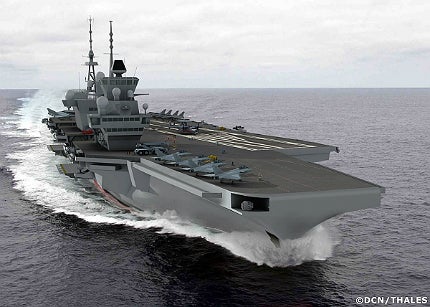 It is a familiar story for most western countries, costs for equipment keeps increasing while military spending continues to decrease. This has led to significant cuts both in equipment and personnel, ultimately impacting a country’s ability to field a capable force on land, sea and in the air.

Despite recent cuts to Brazil’s defence budget, it still accounts for more than half of the region’s total military spending, making it a significant actor in the wider region. Last year, it spent US$33.1bn on defence, which is more than South Korea and Australia.

This growth across the continent can be seen in new and ambitious naval projects in several countries. The recent delivery of three BAE Systems Offshore Patrol Vessels (OPV) to Brazil is one example of this.

These projects are aimed at protecting energy resources, combating non-traditional threats such as the narcotics trade and projecting influence abroad, especially in other developing areas like West Africa.

"According to the Stockholm International Peace Research Institute, military expenditure in South America grew by 3.8% in 2012."

Unlike other regions in the world, South America – and, in particular, the ‘Southern Cone’ consisting of Brazil, Argentina and Chile – lacks any external threat from a hostile power. Equally, any prospect of a major inter-state war on the continent has largely dissipated in recent years as a result of greater economic and security integration between states.

In March 2011, the Union of South American Nations (UNASUR) – similar in principle to the European Union but with less integration – became a legal entity. UNASUR has a president and parliament based in Bolivia and, importantly, a defence council. This council serves as a mechanism for regional security and the promotion of military cooperation in South America.

"The region is in the midst of rethinking and reformulating its security priorities and strategies," explains Ralph Espach, director of Latin American Affairs at the Virginia-based CNA think-tank. "All of the major countries have begun writing white papers and national defence strategies, which wasn’t the case before."

These have been written and formulated during a transformation in civil-military relations and increasing civilian control over defence budgets – especially in the context of South America’s history of military dictatorships – which has seen priorities change from military spending to welfare spending.

The lack of external and inter-state threats has also meant a shift in focus towards other non-traditional security concerns like the illicit drugs trade, organised crime and humanitarian operations. This begs the question, what is the military’s role in these types of operations, which have often been the preserve of civilian-led organisations?

The future role of the military is uncertain and could be controversial, says Espach. "The military has been used in many of these countries, especially in Central America, to support counter-drug operations and citizen security operations in many venues and that’s controversial. It’s still in flux and needs to be defined and it’s an uncomfortable situation for the military, as much as it is for the civilian leadership who are trying to tackle these problems."

"There’s a lot of dynamics taking place and a lot of strategic rethinking and shifting that’s effecting navy modernisation," he adds.

These dynamics can be seen in Brazil’s 2008 National Strategy of Defense (NSD) which outlined its approach to naval modernisation.

"This growth across the continent can be seen in new and ambitious naval projects in several countries."

The Brazilian Navy is the biggest navy in South America with more than 100 vessels in its fleet, including a sizable number of frigates and patrol boats.

The document identified four key areas where these assets can be utilised i) defence of oil platforms ii) defence of ports, archipelagos and oceanic islands iii) high-readiness in responding to non-conventional threats vi) peacekeeping capabilities beyond Brazilian waters.

The three OPVs purchased from BAE Systems in 2011, with the final vessel delivered this year, are a key asset in this naval strategy. The 90m-long ships are teaming with 21st Century technology, including the Osiris combat and surveillance system, manufactured by Ultra Electronics, and the Terma Scanter 4100 X-band radar.

This makes ships particularly effective in detecting smaller craft which could be used to attack oil platforms or smuggle drugs, especially within its exclusive economic zone (EEZ).

Another significant naval power in South America is Brazil’s western neighbour, Chile. With a significant stretch of coastline, it too has been going through a period of strategic rethinking and naval modernisation. Similar to Brazil’s NSD, the Chilean Navy has set out their ‘Three Vectors Strategy’ which indentifies territorial security and defence, humanitarian operations and supporting non-military maritime activities as strategic goals.

To meet the requirements of Three Vectors, it has acquired a number of second-hand frigates and two newly-built Scorpene-Class submarines (costing a cool US$450m each) to carry out ‘sea denial’ operations – denying an enemy the use of territorial waters and beyond.

Like Brazil, Chile has also invested in modern OPV capabilities. Two German OPVs were delivered in 2008 and 2009 and a third is currently under construction. Although designed by German company Fassmer, the OPVs are built entirely in Chile by Astilleros Y Maestranzas de la Armada (ASMAR).

The OPVs have also been ordered by the Colombian and Argentinian navies. Although for the latter, naval modernisation is being seriously hindered by a desperately weak economy.

Just how desperate it is was evident in January when a retired Argentine destroyer, which fought in the Falklands war, sank while moored at Puerto Belgrano naval base. Poor maintenance was said to be at fault.

"Similar to Brazil’s NSD, the Chilean Navy has set out their ‘Three Vectors Strategy’ which indentifies territorial security and defence."

The Brazilian Navy is also gearing its future naval capabilities towards sea denial operations. Its flagship vessel for this task is the aircraft carrier São Paulo, which it acquired from the French Navy in 2000.

As part of its naval ambitions, Brazil is looking to eventually acquire a brand new aircraft carrier to replace São Paulo in the 2020s. This could be based on DCNS’s PA-2 carrier, originally designed for the France’s future carrier requirement and similar in design to the Royal Navy’s new Queen Elizabeth-Class vessels. The PA-2 is being marketed for export by DCNS ever since France put the brakes on the future carrier project in its 2013 Defence White Paper.

Brazil’s carrier aspirations show the stark contrast between developing economies and Western states – France in particular – that can no longer afford to field these high-end capabilities.

In 2009, the Brazilian Government ordered four Scorpene-Class submarines (similar to Chile) in a deal worth US$9.9bn. The first submarine Riachuelo will be commissioned next year and the rest will follow throughout the decade. While Riachuelo has been partly built in France, the multibillion deal will see the rest built at the Brazilian Navy Shipyard in Rio de Janeiro.

Significantly, Brazil is working with DCNS to develop a nuclear-powered attack submarine (SSN), similar in capabilities to France’s future Barracuda-Class or Britain’s Astute-Class submarines. But experts are questioning why Brazil needs to procure a nuclear-powered submarine.

In a 2009 paper for the US Naval Institute, ambassador Paul D. Taylor questioned whether a nuclear submarine was relevant for Brazil’s aims set out in the NSD. On the protection of oil platforms, Taylor said: "A fleet of small, fast surface ships could be built for the price of a single nuclear submarine and would also present a visible deterrent to anyone attempting to jeopardise Brazilian control of the platforms."

With naval modernisation continuing apace, South America is proving to be a lucrative region for manufacturers to export new equipment. But it is also creating opportunities for countries such as Chile and Brazil to sustain and develop their national defence industrial base. Both countries procurement of OPVs is one example of this.

"In 2009, the Brazilian Government ordered four Scorpene-Class submarines (similar to Chile) in a deal worth US$9.9bn."

As part of their contract with BAE Systems, Brazil has the option to build a further five OPVs in their own shipyards, rather than in the UK.

Chile’s aim, however, is not to build significant naval manufacturing capacity, especially while it is acquiring second-hand frigates from Britain and the Netherlands. Companies like ASMAR have instead concentrated on upgrading older ships with newer equipment and weaponry. In 2009, ASMAR upgraded Chile’s older Type 209 submarines and in 2008 also upgraded Almirante Williams, the former HMS Sheffield Type 22 Royal Navy frigate.

Brazil’s aims are much different, says Dr Martin Robson at the Corbett Centre for Maritime Policy Studies, King’s College London, and an expert on Brazil’s naval capabilities. "If you look at the agreements that are in place, it is all about knowledge transfer. Brazil wants to start building its own military capabilities to a similar standard as what western powers build."

"That also links in with certain domestic programmes. The procurement of an SSN links in with their plan for the expansion of their domestic nuclear energy production as well. So they are using defence as a kick start for other projects," Robson explains.

Brazil’s ambitions as a future global naval power is also a key driver in its willingness to project power abroad, as evidenced in its 2008 NDS. In 2010, the supply ship Garcia D’Avila (formerly RFA Sir Galahad) transported 900t of cargo to the victims of the Haitian earthquake. Brazil, with the frigate Constituição, is the lead maritime nation for the United Nations Interim Force in Lebanon (UNIFIL).

Another role Brazil has taken upon itself is training and mentoring military forces across West Africa. No other South American country has, or can hope to achieve, this level of global influence.

It is with these ambitions in mind that Brazil is also considering BAE System’s Global Combat Ship, which will eventually see service in the Royal Navy as the Type 26. This will include the transfer of technologies and the ability to build ships in Brazil, rather than Europe.

These trends, however, are not set in stone and can be effected by the ongoing volatility of the world economy. Even Brazil has had cut its defence budget in response to the global slowdown, which has ultimately affected procurement projects. But a renewed strategic focus, linked with national growth and development, has created an emerging confidence in the region of which naval modernisation is just one example of.

The military commonly uses lasers to mark a target, guide weapons and for missile defence. But using them against enemy troops isn’t new.

Navy Expenditure in the Chile to 2019: Market Brief