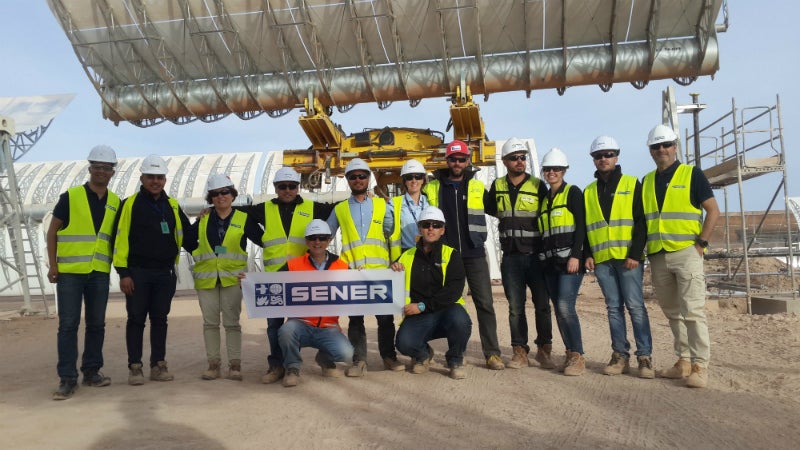 The SENER engineering and technology group is part of a consortium delivering the turnkey construction of three thermosolar facilities: NOORo I (already in commercial operation), NOORo II and NOORo III. As well as being the supplier of all the technology. For NOORo II, SENER installed its SENERtrough®-2 technology – a high-precision system that is the second generation of collectors named as such, having been designed and patented in their entirety by the engineering and construction firm SENER.
"SENER is number one in the world for CSP, both for the amount of projects it has delivered – the majority of which were turnkey constructions – and for the development of the proprietary technology it uses in these plants.

One such example is SENERtrough®-2, an innovative solution that increases the capture capacity of each module by 30%," says Ánas Raisuni, Country Manager of SENER in Morocco.

The scope of the work performed by SENER in NOORo II encompasses the conceptual and basic engineering, the engineering and construction of the solar field, the detailed engineering of various systems including the heat transfer fluid (HTF) and thermal storage systems, and the supply of critical equipment needed for its operation. Following the start of the works in 2015, SENER took charge of assembling the collector loops in a premises located on-site at the complex in Ouarzazate (Morocco), which is the largest concentrated solar power (CSP) plant on the planet. Subsequent responsibilities included the installation of the solar field, made up of 20,400 collectors arranged in 425 loops, running over 270 km in length and providing a total reflective area of 1.8 million square meters, distributed over an area of 700 hectares.

The NOORo II plant has a nominal power of 200 MWe, making it the largest in the world using parabolic trough technology. NOORo II also has 7,2 hours of molten salt heat storage, enabling it to continue providing the grid with electricity despite the absence of solar radiation. The NOORo II plant will save over 170,000 tons of CO2 emissions, with clean and safe energy being supplied to around 160,000 homes.