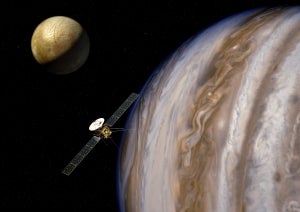 Sener engineering and technology group announced at the UK Farnborough International Airshow the recent award by the European Space Agency (ESA) for the development of the medium-gain antenna for the Jupiter Icy Moons Explorer (JUICE) mission.

JUICE is the most important mission of the ESA to explore the Jovian system, a programme aimed at widening our knowledge of the complex interactions between Jupiter and its icy moons, Europa, Callisto and Ganymede, with a launch date set for 2022.

This is the second Sener development on this mission, as it is also responsible for the magnetometer boom. In this new commission, Sener will execute the entire Medium-Gain Antenna Major Assembly (MGAMA) that will back up the satellite’s main antenna (High-Gain Antenna, or HGA) in order to guarantee communication between JUICE and Earth at all times.

By means of a Radio-Frequency Experiment (RSE), the medium-gain antenna will also be tasked with analysing the characteristics of each one of the celestial bodies it will visit in the course of the mission, the moons of Ganymede, Callisto and Europa and the planet Jupiter, as well as the gravitational characteristics and composition of their atmosphere.

The medium-gain antenna to be executed by Sener comprises the antenna reflector, the pointing mechanism and the control electronics.

One of the main challenges faced by Sener in this commission includes the extreme radiation conditions of Jupiter that will affect the antenna, as the device is located on the outside of the satellite.

Moreover, the mission will have to contend with extreme temperatures since it will fly-by Venus in order to achieve the gravitational assistance needed to reach its final destination, which means that it will be subjected to both the high temperatures of Venus and the extreme cold of Jupiter.

Sener already has experience in this type of work, having developed the complete HGA and MGA subsystems for the Solar Orbiter mission and the MGA and pointing mechanism for the BepiColombo mission to Mercury, which also involved significant technical demands due to extreme environmental conditions.

Moreover, SENER executed the pointing mechanism for the high-gain antennas of the Curiosity rover on Mars and Euclid.

With almost 50 years behind it in the space sector, SENER is the leading Spanish company in the ESA’s science programmes by virtue of its engineering inputs, and has participated in more than half of the agency’s programmes. Some of its most outstanding references are JUICE, ATHENA, Solar Orbiter, Copernicus, Proba-3, Gaia, Exomars, IXV, the Curiosity rover, Euclid, Lisa Pathfinder, Seosat / INGENIO, Herschel and Planck and Meteosat Third Generation.

To date, Sener has delivered more than 270 devices and systems for satellites and space vehicles to agencies in the US (NASA), Europe (ESA), Japan (JAXA) and Russia (Roscosmos).