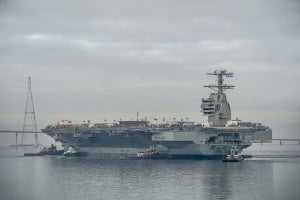 QinetiQ’s Paramarine Ship and Submersible Design Software has been selected by Newport News Shipbuilding (NSS) as its primary naval architectural software. QinetiQ Paramarine Software will be used for all ships designed and built at its shipyard, including use on the US Navy’s latest class of aircraft carriers and to support submarine research and development.

Newport News Shipbuilding purchased a Team Paramarine License, which allows multiple users to work concurrently on one design and features an auditing feature for subsequent design approval. In addition, a number of training courses have been delivered to the naval architecture team at the shipyard’s training facility at Newport News, covering surface ship and submarine new user and early stage design.

QinetiQ Marine Design software managing director Vittorio Vagliani said: "We are very pleased to have been selected by one of the world’s leading naval ship and submarine builders. The selection of Paramarine software by NNS is a massive vote of confidence in the power and flexibility of the software. We look forward to working with NNS."