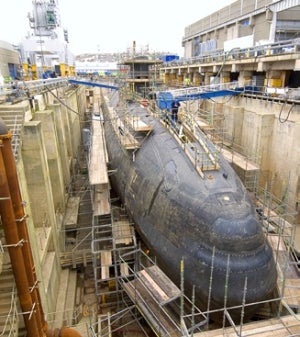 For over a century, Babcock has been a name synonymous with ultra-reliable engineering excellence. It now employs over 27,000 people across the UK, Africa, North America, Australasia and the Middle East. Babcock is structured around a number of divisions, including:

This case study covers the use of Paramarine marine design software by the Marine and Technology division within Babcock.

This division, which employs more than 50 naval architects, not only has a through-life support contract with the MoD for the majority of the Royal Navy’s ships and submarines, but it also works within the commercial sector. As well as having created a number of concept designs for the Royal Navy, Babcock’s service agreement includes providing design support for the MoD Capital Ships Directorate covering:

Babcock also works with other navies around the world. In the commercial sector, Babcock works on offshore renewable energy service vessels.

Within the Marine and Technology Division, the naval architects face many challenges, including:

Babcock has been using Paramarine for more than ten years, and it has become a core software tool for the team of naval architects working for Babcock. Paramine has been used on a wide variety of projects and ongoing activities for both Babcock’s defence and commercial markets. There are many good examples that demonstrate the value that Babcock derives from using Paramarine on Royal Navy ships, including:

HMS Albion is a Landing Platform Dock (LPD), which is capable of embarking 256 staff or troops and their associated vehicles and combat supplies. The ship has a flight deck capable of operating two helicopters at a time, with a third aircraft parked. Babcock did a significant amount of work on this complex ship using Paramarine, which included:

"Using Paramarine’s damage template within the stability module enabled us to vastly simplify the conditions that need to be analysed. This made it easier for us to carry out complex analysis quickly," observed Richard Braithwaite, Consultant Naval Architect, Marine and Technology Division, Babcock.

HMS Ocean is an amphibious assault ship designed to support amphibious landing operations and is currently the largest ship in the Royal Navy. For this ship, Babcock created a large structural module in Paramarine from which analysis of the following areas could be carried out:

The data generated by these analyses are fed into Seagoing Paramarine, which allows the ship’s commanding officer to make informed decisions following damage.

"Paramarine is a very powerful and robust tool and excellent for the specialised work we do on complex ships."

"Paramarine is a very powerful and robust tool and excellent for the specialised work we do on complex ships. For example, we used Paramarine’s solid modelling capability to model the water jets on a super-yacht that Babcock built," said Richard Braithwaite.

"The support from QinetiQ GRC is very good. For example, we can ring up with an issue and get it resolved very quickly. Their customer service is excellent and highly responsive. We enjoy a close working relationship with the Paramarine software developers and naval architects providing feedback which is often incorporated into the product," said Richard Braithwaite.

"Paramarine is our marine design software tool of choice when it comes to stability and naval architecture calculations for the MoD. It is also used to develop concepts for bids. Its early-stage design module allows us to build concept designs quickly, robustly and efficiently," said Ben Munro, Principal Naval Architect, Marine and Technology Division, Babcock.