Naval Vessels for the Bulgarian Navy on Track 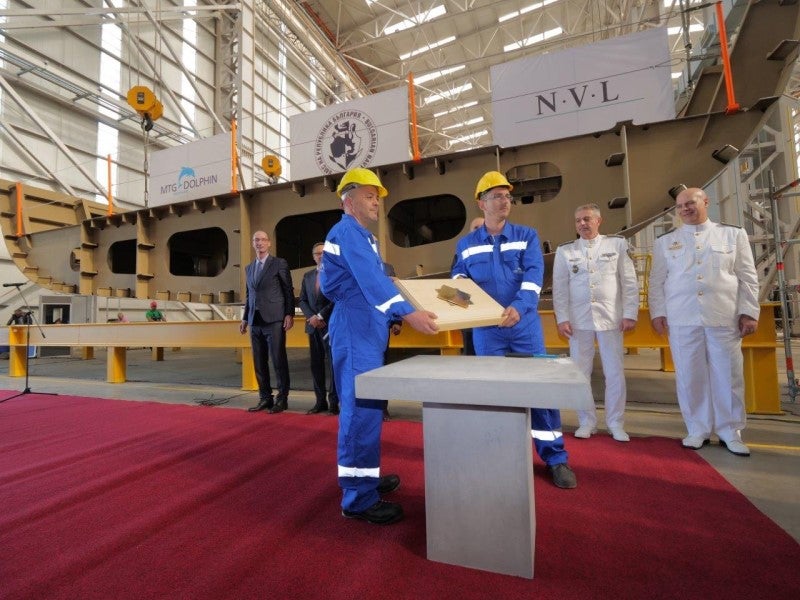 The keel laying of the first of two multipurpose modular patrol vessels (MMPV) for the Bulgarian Navy took place in Varna, Bulgaria, today as scheduled. The President of the Republic of Bulgaria, Minister of Defense, Chief of Defense, Commander of the Bulgarian Navy and representatives of local authorities attended this traditional milestone in shipbuilding. Both vessels are being built at MTG Dolphin in Varna under the management of NVL Group, formerly Lürssen Defence, with the involvement of numerous Bulgarian suppliers.

“Laying the keel of the future Bulgarian Ship ‘Hrabri’ truly is a historic moment – not only for the countless designers, welders, metal workers, electricians and master craftsmen whose high expertise, ingenuity, hard work and dedication will bring this modern warship to life – but for the future sailors of the Bulgarian Navy who will serve on board, protecting our nation, deterring our adversaries and flying proudly the Bulgarian flag over the seas ensuring our freedom for decades to come”, said Rear Admiral Kiril Mihaylov, Commander of the Bulgarian Navy.

During the keel-laying ceremony, representatives from the project affixed a brass plate with four coins onto a wooden block, each coin symbolising one of the parties involved in the project – the Bulgarian Navy, NVL Group, MTG Dolphin and one in commemoration of the event. This was then placed beneath the keel block, which was lowered to meet the plate in a celebratory process. This centuries-old custom is said to bring good luck to both the ship and the crew.

“A keel-laying ceremony is always a very emotional moment for shipbuilders, as it is the first time that the project becomes truly tangible. Today’s ceremony demonstrates the high level of commitment with which not only our employees but those of our partner MTG and also our suppliers are working on this new construction project. My thanks, above all, go to all those involved for reaching this special milestone”, explained Dirk Malgowski, Managing Director of NVL Group.

The vessels, which are 90 metres in length, with a displacement of approximately 2,300t, are based on a proven NVL design and feature an integrated combat management system. The units are predestined for tasks within the framework of international alliance missions for NATO and the EU, and will enable the Bulgarian Navy to counter air and land-based threats, as well as surface and undersea threats.

The MMPV project is currently the Bulgarian Navy’s largest newbuild project to date. Delivery of the first vessel is scheduled for the third quarter of 2025, and the second vessel a year later.

“We have reached another important milestone of the project in time. Good cooperation with NVL and all parties involved is a guarantee for successful completion of the set tasks, and delivery of the vessels as planned”, said Svetlin Stoyanov, CEO of MTG Dolphin.

The project is also having a positive impact on the local economy and local employment. So far, more than 40 local employees have been recruited through NTB (Naval Technology Bulgaria) in Varna, a company newly established by the NVL Group. In addition, numerous local suppliers, for example for interior fittings, insulation or air conditioning, are gradually being integrated into the project, thus indirectly creating new jobs in Bulgaria.

The geopolitical situation has become more diverse over the last one and a half years and the momentum for a sound strategical sovereignty has re-emerged.

NVL's offshore patrol vessels (OPVs) are built to face a variety of challenges.