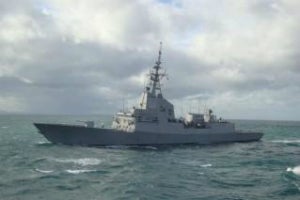 The Spanish Navy’s frigate ‘Méndez Núñez’ (F-104) has set sail from Ferrol towards Scotland yesterday to participate in a Nato joint training exercise with military units from several nations.

The ‘Joint Warrior’ exercise is organised and led by the United Kingdom.

‘Joint Warrior’ exercises are manoeuvres where units from the three services of different allied nations take part. The F-104 is the Spanish contribution to an exercise where more than 50 naval units are scheduled to take part.

These manoeuvres contemplate a complex scenario, including crisis and conflict situations, training on different fields like the fight against terrorism, cyber-attacks, protection of sea lines of communication (SLOCs,) and anti-air, anti-ship and anti-submarine warfare.

Personnel from the 31st Escort Squadron (F-100 frigates) have also embarked for the whole period of the deployment. The squadron commander, Captain Benigno González-Aller will assume command of the anti-submarine warfare element of the joint force.

Upon the conclusion of the exercise at the end of April, the F-104 will proceed towards London before arriving at her home port in Ferrol.