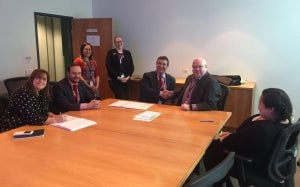 The Commonwealth of Australia and Navantia have signed an agreement for the Risk Reduction and Design Study (RRDS) Phase for the SEA 5000 Future Frigate Programme.

This is part of the Competitive Evaluation Process (CEP) being conducted by the Australian Department of Defence for the SEA5000 Future Frigate Programme. The Commonwealth has also entered into similar agreements with each of Fincantieri and BAE Systems.

Under the agreement, and for a period of approximately one year, the Commonwealth and Navantia will engage in an interactive process that will allow the Australian Department of Defence to assess the capability, risk and other matters associated with Navantia’s proposed ship design.

This signature is related to the announcement of Australian Prime Minister The Hon. Malcom Turnbull, that Navantia and two other designers had been selected to participate in the RRDS stage of the CEP.

Navantia’s participation in this programme is a significant milestone for the future of Navantia in Australia, as the opportunity to be a potential designer of the future frigates will be the most important naval surface shipbuilding programme worldwide.

This programme has the potential to allow for the development of Navantia Australia’s local capabilities and its Operations and Design Centre, which will actively participate in this design phase.