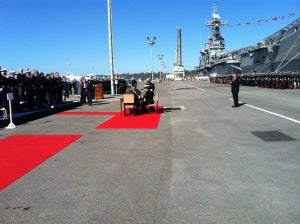 Navantia has commissioned the naval ship BAM ‘Relámpago’ for the Spanish Navy, in a ceremony presided by Pedro Morenés, the minister of defence.

The ceremony has also been attended by the CEO of Navantia, Luis Cacho, the chief of the navy, Manuel Rebollo, and other naval and political representatives, including defence attachés of other countries such as South Africa, Turkey and Australia.

BAM ‘Relámpago’ is the third OPV of an initial series of four that Navantia is building for the Spanish Navy. The first two units, ‘Meteoro’ and ‘Rayo’, were commissioned in July and October 2011.

BAM is a moderately sized, high performance ship with great versatility regarding missions. It enjoys a high level of system commonality with other Spanish Navy ships and has low acquisition and life cycle costs.