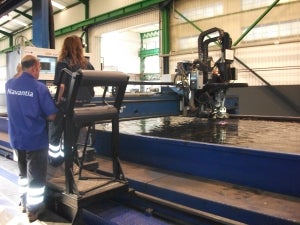 Navantia will build 12 units for the ALHD Canberra and the ALHD Adelaide.

Navantia has celebrated last October the cut of steel of the first LCM-1E high speed landing craft, of a series of 12 that Navantia will build for the Royal Australian Navy, to be operating on board the ALHD Canberra and ALHD Adelaide
These units are identical to the LCM-1E high speed landing crafts built by Navantia and in service with the Spanish Navy since 2007 and 2008.
Each LCM-1E weights 110 tonnes. The first four will arrive in 2014, when the first of the new ALHDs becomes operational.

The main characteristics are:

After a 30 day transit across the world’s oceans, NUSHIP Stalwart arrived safely at Fleet...