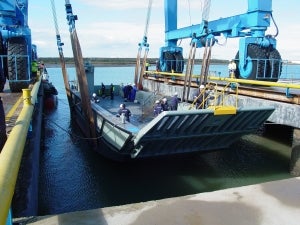 Navantia has launched the ninth LLC fast-landing craft for the Royal Australian Navy. Part of a 12-vessel fleet, the design of these ships is based on the fast-landing crafts built also by Navantia for the Spanish Navy between 2006 and 2008.

The contract for the construction of the fleet was signed in September 2011 and the works have been executed in the Bay of Cádiz.

The landing crafts are destined to operate with the ALHD ‘Canberra’ and ALHD ‘Adelaide’ strategic projection ships, similar to LHD ‘Juan Carlos I’, also built by Navantia in cooperation with BAE Systems.

All the ships are scheduled to be delivered by mid-2015.

Australia is a strategic country for Navantia and has opened a subsidiary, Navantia Australia, in order to cooperate with the Australian Government in future options for its Navy.