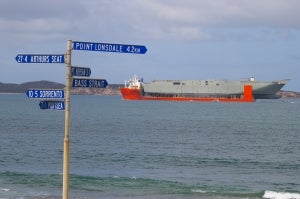 The ALHD "Canberra" has arrived to Australia after two months of navigation.

The loading operation on board the heavy sea lift ship "Blue Marlin" started on the 4th of August in La Coruña (Northwestern Spain) waters, a very specialized operation in which engineers of Navantia, BAES and Dockwise participated.

The departure from La Coruña was on the 17th of August, supported by Navantia during the trip, in which the company has provided all its know-how for the success of the mission.

Construction of the ship started in Spain in 2008, with the hull launched by Navantia in 2011.

Navantia is very proud of the excellency of the LHD, the most modern amphibious ship in the international market. It has built one unit for the Spanish Navy, named "Juan Carlos I", was contracted to build 2 units for the Royal Australian Navy and is a very important candidate in Turkey and India.