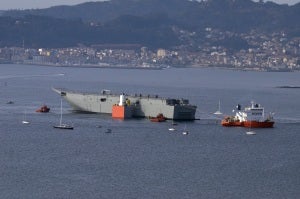 The ALHD ‘Adelaide’ has been loaded onboard the "Blue Marlin", owned by the Dutch company Dockwise, on 10 December 2013 in Vigo.

The operation has began at 12pm with the approaching and positioning maneuvers of the ALHD ‘Adelaide’ on the supporting bed installed on the "Blue Marlin". The operation was finished once the aforementioned vessel was refloated as the "Adelaide" on the deck of the ‘Blue Marlin’.

Both vessels will remain berth at the quay at Vigo Port for a week in order to complete the fixings of the ‘Adelaide’ for its transporting to Australia that will last more than 55 days.

In addition to the currently work done with the ALHD ‘Canberra’, the ALHD ‘Adelaide’ will be transported to BAE Systems Shipyard at Williamstown in Australia. Once there, the works on the ship will continue and finally it will be delivered to the Commonwealth of Australia.

The contract will build on two units of the ALHD based on the LHD ‘Juan Carlos I’ owned by the Spanish Navy, which was signed in 2007 and signifies the introduction of Navantia in the military Australian market. The delivery of this ship, in advanced from scheduled date, means the consolidation of Navantia as a technological partner in Australia and its positioning for future contracts with the Australian Navy. At present, Navantia is building 12 fast landing craft and is participating, with the design and transference of technology, in the building of three destroyers.

The ALHD is a multipurpose vessel with different capacities depending on the mission: