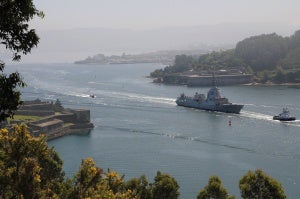 During these sea trials, which will last all week, the shipyard will test the correct integration of the combat system in the platform, including trials of all sensors and weapons on board, as anti-air, anti-surface, anti-submarine, electronic war and communications exercises.

For the performance of several combat scenarios, Navantia will count on the collaboration of other surface units, including a F-100 class frigate, as well as land radio stations and communication satellites.

Navantia has integrated the combat system SPY-1D (V) version on board, making the F-105 the most advanced of all the F-100 class.

The sea trials will take place with more than 300 people on board, including Navantia staff, Spanish Navy and auxiliary industry. It is also expected to receive Australian staff, as part of the training program that Navantia is providing regarding the AWD’s contract, a design based on the F-105.

The Norwegian Defence Material Agency (NDMA) has congratulated Navantia and its subcontractors for the successful...