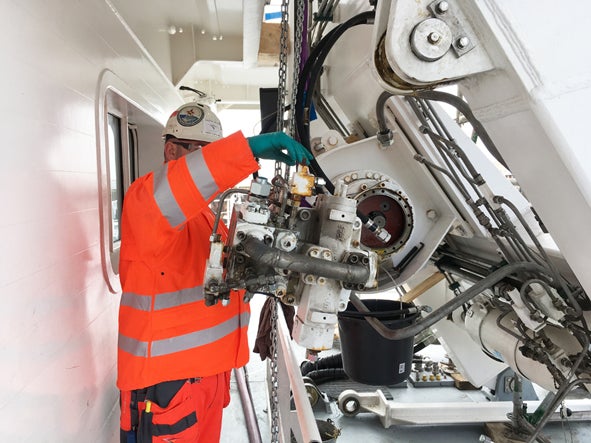 The revolutionary SWATH Wandelaar was designed and built by Abeking and Rasmussen (A&R) for the Belgian Pilots, and is operated by Flemish Government subsidiary Vloot.

Lead Vloot superintendent Benoît Versavel took time out to praise the service offered by Vestdavit’s engineers as part of the load tests, safety tests and general overhaul of the PAPH-10000 davits he describes as "reliable workhorses".

Vesavel added: "Overall, I am really pleased. The technicians are friendly, but very professional, and perform excellent work."

The PAPH-10000 provides something of a model for product development at Vestdavit, and servicing units in service brings the best out of its service technicians. Its conception can be traced to a single phone call from A&R, when the company was told: "We have a client with a special need."

The client turned out to be the organisation representing the pilots who operate along the Elbe, whose high expectations stretched our best designers and naval architect, while also requiring willingness to engage fully with A&R project management, pilot management and crew.

The result was, and still is, the most advanced davit Vestdavit has ever made – the PAPH type, single-point davit for MOB and FRDCs, characterised by its compact design and its anti-pendulation device.

The PAPH-10000 is PLC computer-controlled with preprogrammed sequences for launching and recovering the boat. This enables the capability for multiple embarkation positions.

The two davits onboard Wandelaar are used for as many as 7,000 operations yearly, transferring pilots to and from ships outside the port of Antwerp. The vessel plays a key role keeping ship traffic running in the busy port.

To find out more about the Vestdavit service network, contact the company via the enquiry form.