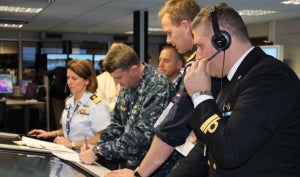 IBR Sistemi is pleased to announce that its JTTS simulation system will be employed in NATO’s Harbour Protection Table-Top Exercise (HPT2E).

The exercise is designed to significantly advance interoperability and capabilities in maritime security. Sponsored by NATO’s Emerging Security Challenges Division Defence Against Terrorism programme of work, the exercise, which will be held 20-23 March 2012 at La Spezia, Italy, focuses on the protection of military forces, shipments, and critical civilian infrastructure in ports and harbours during times of high threat alert.

Using serious gaming with cutting-edge modelling and simulation methodologies and technologies, the Centre’s cadre of world-class scientists and engineers address emerging security challenges and anticipate solutions which will enable Smart Defence through better cooperation and interoperability.

NURC has developed computer models of new and existing technologies that have been proposed for safely enforcing security stand-off zones on the waterside in ports. These technologies will be exercised in dynamic attacker-defender tactical vignettes played in a virtual port environment. HTP2E will develop concepts of use for the new technologies and will provide a preliminary assessment of their overall effectiveness in realistic action. HTP2E will be carried out on NURC’s OpenSea Tactical Theatre Simulator, which has been developed by four companies working closely together: BK s.r.l. (La Spezia), IBR Sistemi (Genoa), Ing. De Rosa (La Spezia), and SpirOps (Parigi).

"We are very proud to host this exercise," said Dr. Ron Kessel, NURC Scientist and OpenSea Project Leader. "HTP2E is a significant advance in tactical gaming and it is the first time that serious gaming is being used in the Defence against Terrorism programme."

While the conflict and threats posed in HPT2E are fictional, the scenes, interfaces and dynamics are realistic. Indeed, the port is modelled on the Port of La Spezia so that participants appreciate how serious gaming in NURC’s new laboratory conveys much the same sense of presence that one finds travelling in the area in reality. The exercise includes players, analysts, and observers from NATO military and civilian security providers from around the world.