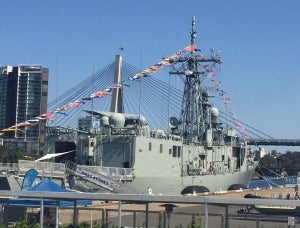 At this year’s Pacific trade fair from 6-8 October in Sydney, Noske-Kaeser introduced the newly founded enterprise ‘Noske-Kaeser Marine Australia’. The new company was brought into being in order to exclusively deal with the maritime topics of the region.

"In the Australian economic area Noske-Kaeser is a reliable partner of the maritime industries and has decades of extensive experience in the area of local content at its disposal.

"By taking this step, we strengthen our local partners and provide an extended service", Jurgen Matthes, CEO of Noske-Kaeser, declares.

In addition to the founding, Noske-Kaeser presented its broad product range of in-house developments for submarines and surface vessels, including particular fire fighting systems for submarines, modern CBRN protection systems as well as prewetting systems.

"The focus of our talks and the fair in general was on the new Australian submarine programme SEA 1000", Matthes summarises.

"The Pacific as an international maritime fair for the Pacific area offered the ideal forum for exchange and discussions on this highly topical subject."

For more than 135 years Noske-Kaeser has been a leading provider of HVAC, fire fighting and CBRN technologies and is the main supplier of the German Navy. The company exhibited at the Pacific for the fourth time.

With a tradition of innovation, Noske-Kaeser is again coming up with an innovative technology: the...

Noske-Kaeser have supplied more than 200 submarines worldwide for more than 50 years.Our technology systems...