In Association with Quantic Evans

Film capacitors have a higher voltage resistance than electrolytic capacitors, the ESR (Equivalent Series Resistance), also known as internal resistance, is low, performance is stable, and they last longer.

Polymer film capacitors offer mechanical flexibility, immunity to aging and stable operating characteristics for power applications. This presentation introduces polymer or plastic film capacitors. It deep-dives into their champion features, including stability under higher voltage loads and high ripple current. As film makers continue to increase the working range of film capacitors, more use cases are emerging.
By Quantic Evans 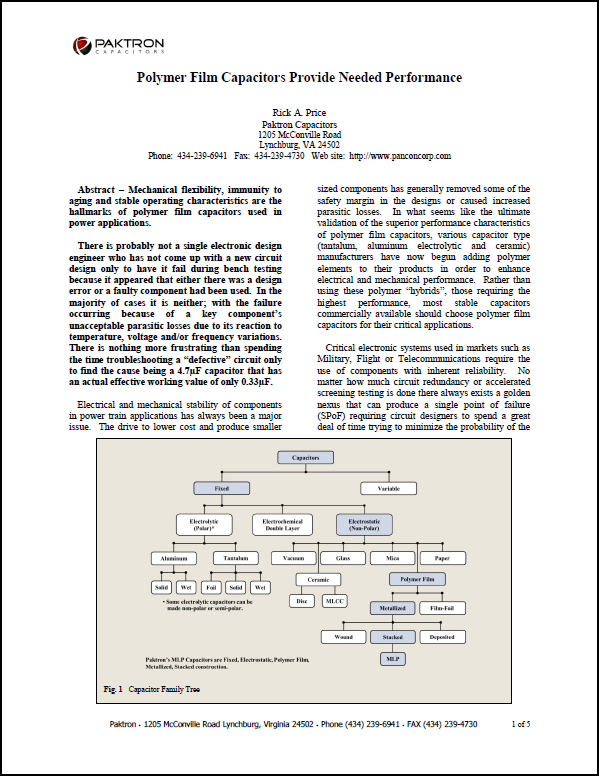 They also have greater dielectric strength and processing features, and Physical Vapor Deposition (PVD) technology can be used to provide high-frequency capacitance in a reduced profile.

As the need for portable electronics using high frequencies, such as communication devices, rises, high-efficiency low power AC/DC converters for these devices must be miniaturised.

The simple diode rectifier used in traditional AC/DC converters is made up of multiple diodes and needs a sizable capacitor to sustain a high output voltage level. For low-power systems that need output voltage as low as one volt, this scenario is not suitable.

The size of passive parts, such as capacitors used as an output filter, is still inversely correlated with the dimensions of an AC/DC converter.

As a result, micro-capacitors are required, and they somehow rely on high permittivity dielectric materials. In order to attain large capacitance densities, a lot of research has been done on materials with high dielectric characteristics.

A titanium dioxide (TiO2) dielectric with high permittivity is a useful material for insulator deposition at high frequency with a reduced tangent.

TiO2 is frequently utilised in electrical, industrial, and biomedical applications such as semiconductor technology and gas sensors.

Owing to the above characteristics, film capacitors are especially useful for all classes and types of EVs. Unit prices are coming down due to high-volume demands from just this sector.

Their SWaP (size, weight, and power) features are being refined constantly to make them lighter, smaller, and able to handle power as needed by applications.

A few developments in film capacitors:

Film capacitors use a plastic film as the dielectric, as the name suggests, and are classified into two primary groups, namely foil electrode types and vapour deposition electrode (metallised film) types, depending on how the internal electrode is made.

Wound and laminated types which may be inductive or non-inductive are just a few of the construction-related subcategories.

The performance of film capacitors differs, depending on the type of dielectric. It is therefore necessary to select the proper type according to the usage conditions.

This kind of capacitor uses a layer of metal (such as aluminium or zinc) coated on the plastic film itself to produce an internal electrode in place of foil as the electrode.

The capacitor can be made smaller than the foil electrode type since the deposited film is so thin. The electrode is linked to an end face in non-inductive vapour deposition type capacitors. There are two types of manufacturing processes: wound and laminated.

Paktron is one of the oldest capacitor producers in the US and manufactures multilayer polymer film capacitors that lead the industry in terms of technology. It distributes its products in a variety of industries, including telecommunications, the military, space, commercial, automotive, and other industries that require High-Reliability products.

“Paktron makes a multilayer film capacitor that can be used instead of a ceramic for those unique applications where the reliability is very high. When a circuit board is under high vibration it will flex, so Paktron film capacitor will be the solution to that problem,” says Misha Pierre-Mike, sales and marketing manager at Quantic Paktron.

“They’re very stable; so if your temperatures are at either end of the extreme, very cold or very hot, the performance of a Paktron multilayer film capacitor is very predictable. So, they perform well over temperature. They’re mechanically durable, they’re very lightweight because they’re made out of plastic film.”

Paktron is the technological pioneer in the production of multilayer polymer film capacitors, holding more than 75 patents for machine design and film capacitors combined.

It also pioneered the technology behind its Interleaf® Technology technique of capacitor production, which increases a device’s electrical characteristics and stability under real-life situations.

The company creates a construction hybrid that resembles a multilayer ceramic capacitor in cross-section but gives all the fail-safe benefits of a stacked plastic film capacitor by using a high laminating pressure, linear stacking method.

Polymer film capacitors offer mechanical flexibility, immunity to aging and stable operating characteristics for power applications. This presentation introduces polymer or plastic film capacitors. It deep-dives into their champion features, including stability under higher voltage loads and high ripple current. As film makers continue to increase the working range of film capacitors, more use cases are emerging.
By Quantic Evans