The Tanan 300 UAS is suitable for both maritime and land applications.

Tanan 300 was displayed at Eurosatory defence and security exhibition in June 2012. Image courtesy of Tangopaso.

The Tanan 300 UAS was exhibited during the Paris Air Show in June 2013.

The unmanned system can execute missions for more than eight hours. 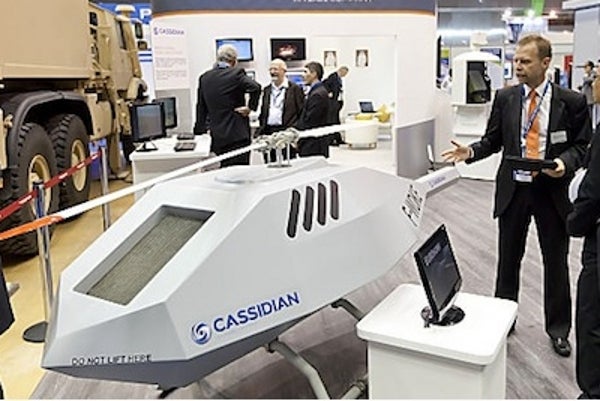 Tanan 300 is a new generation vertical take-off and landing (VTOL) tactical unmanned aerial system (UAS) being built by Cassidian, an EADS company (now Airbus Defence and Space). The UAS is suitable for both maritime and land applications.

The Tanan 300 UAS demonstrator performed its maiden flight in 2010 and was launched in October 2012. The full scale model of the system was displayed at Eurosatory defence and security exhibition at Paris in June 2012. It was also exhibited during the Paris Air Show in June 2013 and the Defexpo in India in February 2014.

Cassidian placed an order with CybAero for the manufacture of subsystems for the Tanan 300 UAS in May 2013. CybAero had earlier developed prototypes and powertrain for the UAS. It further secured an additional order for subsystems in October 2013.

The Tanan 300 compact VTOL UAS features open, modular architecture and can be easily carried and deployed by a single operator in unprepared areas and at sea. It is capable of performing protection and monitoring missions in difficult weather conditions. It can be deployed on ships and offers reduced logistics footprint and maintenance costs

The aircraft measures 4.3m in length and 1.2m in width. The diameter of the main rotor is 5m. The maximum take-off weight of the UAS is 300kg and the maximum payload carrying capacity is 50kg.

Payloads of the UAS

The payloads attached to the UAS provide the ability to recognise, classify and detect high-value targets from a safe distance.

The electro-optical / infrared (EO/IR) sensor system aboard captures full high definition (HD) colour imagery and video in both day and night conditions, and can also scan and track the targets.

The maritime radar system allows the UAS to execute search, detection and tracking missions on the coast. It can detect a target with a radar cross section (RCS) of 1m² beyond 15nm in sea state 3. The automatic identification system (AIS) identifies details of ships such as vessel size and vessel name up to 20 characters.

The captured real time information is transmitted to the ground control station (GCS) through a high-speed data link. The GCS displays all necessary information on the operator’s double screen. The data can also be exported to a remote command and control station through video transmission.

"It is capable of performing protection and monitoring missions in difficult weather conditions."

Tanan 300 also features communications intelligence, electronic surveillance system, identification, friend or foe (IFF) system, and direction finder. It can be further integrated with other payload systems based on customer requirements.

Engine and performance of Tanan 300

The Tanan 300 aerial system is equipped with a reliable and powerful diesel engine. The maximum and cruise speeds of the UAS are 150km/h and 100km/h respectively, and the operational range is 180km.

The unmanned aerial vehicle can fly at a maximum altitude of up to 4,000m above sea level. It can fly to a maximum height of 3,000m above ground level and can execute missions for more than eight hours. It can operate in temperatures ranging from -20°C to +50°C.