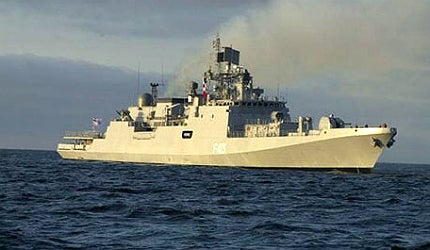 The Talwar-Class guided missile frigate is a modified Krivak III-Class frigate in service with the Indian Navy. Built by Baltiysky Zavod, the frigate supports naval forces during air, surface and sub-surface missions. It is also used to detect and destroy enemy submarines and other surface ships.

"In July 2006 the Indian Government signed a $1.6bn contract with Yantar shipyard for an additional three frigates."

In July 2006 the Indian Government signed a $1.6bn contract with Yantar shipyard for an additional three frigates.

Design of the Indian Navy’s frigate

The Talwar was designed by the Severnoye Design Bureau. The topside and hull sections were redesigned to reduce radar cross-section, electromagnetic, acoustic and infrared signatures. The hull features an outward flare and the superstructure features a tumblehome angle. The design also incorporates stealth technologies.

The Talwar is fitted with a Trebovaniye-M combat information and control system. The system integrates eight T-171 full-colour operator workstations and three central T-162 servers. It manages and controls all weapons on board, develops combat missions depending on the situation analysis and transfers the data to the weapon systems.

Missiles onboard the Talwar-Class frigate

The frigate is armed with an eight-cell 3S14E vertical missile launcher for 3M-54E Klub-N anti-ship missiles. The three-stage missile uses active radar guidance. The Klub-N reaches Mach 2.9 in the terminal stage and has a maximum range of 220km.

The ship is also equipped with a Shtil-1 medium-range surface-to-air missile system. The system can launch SA-N-12 surface-to-air missiles through a 3S-90 missile launcher. A total of 24 missiles are accommodated in a magazine located below deck. The SA-N-12s have a range of 45km and use inertial guidance and semi-active radar homing. In the future, the frigate may be also fitted with Igla-1E portable air defence missiles.

The vessel’s main gun is a forward-fitted AK-190. The 100mm gun incorporates stealth technology to reduce the radar signature of the ship. It has a firing rate of 60 rounds a minute and can engage targets within a range of 15.2km.

The Talwar has a helicopter deck and a hangar to allow the operations of a Ka-28 Helix-A ASW helicopter or a Ka-31 Helix-B airborne early warning helicopter. The helicopters are equipped with over-the-horizon radar systems to detect targets at long ranges. The helideck can also support the naval variant of the HAL Dhruv.

The ship’s surface search radar is a 3Ts-25E Garpun-B radar operating at I-band frequency. It uses active and passive channels for long-range surface target designation. A MR-212 / 201-1 navigation radar and a Kelvin Hughes Nucleus-2 6000A radar are installed for short-range navigation and surface surveillance.