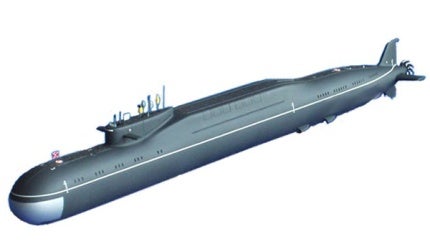 Yury Dolgoruky is a new-generation nuclear-powered ballistic missile submarine which was built by Sevmash shipyard for the Russian Navy. Constructed as the lead-submarine of the Project 955 Borei Class, Yury Dolgoruky is the first submarine launched by Russia after the Soviet era.

Yury Dolgoruky, deployed in the Pacific Fleet of the Russian Navy, is a key component of the country’s nuclear-powered ballistic missile submarine fleet. The Borei Class submarines are intended to replace the Delta III, Delta IV and Typhoon classes of the Russian Navy.

In May 2012, the Russian Ministry of Defence placed a contract for the delivery of five new Project 955A Borei Class nuclear submarines. The Russian Navy plans to acquire ten new Borei Class submarines by 2020.

"Borei Class submarines are intended to replace the Delta III, Delta IV and Typhoon classes of the Russian Navy."

The keel for Yury Dolgoruky was laid in November 1996, but construction was largely delayed because of budget constraints. The submarine was finally launched in February 2008, while the on-board reactor was first activated in November 2008.

The initial sea trials began in June 2009 and were completed in July 2010. The subsequent sea trials were concluded in September 2010.

The submarine successfully launched the first RSM-56 Bulava submarine-launched ballistic missile (SLBM) in June 2011. Yury Dolgoruky completed its state trials in early 2012, and was officially commissioned into the Russian Navy in January 2013.

Design features of the nuclear submarine

Yury Dolgoruky was designed by the Rubin Marine Equipment Design Bureau. The design incorporates a hydro-dynamically efficient hull. The outer hull is covered with anechoic coating to reduce its acoustic signature.

The submarine is equipped with pump-jet propulsion for carrying out quieter operations. Yury Dolgoruky is the first Russian submarine to use such a propulsion system.

The Borei Class vessel has a length of 170m, beam of 13.5m and a draught of ten metres. The surfaced and submerged displacements of the sub are 14,720t and 24,000t respectively. The submarine can hold a crew of 130 personnel.

Yury Dolgoruky is armed with a RSM-56 Bulava SLBM, which was developed by the Moscow Institute of Thermal Technology. Bulava is the naval variant of the SS-27 Topol-M intercontinental ballistic missile. It was approved for service in December 2011.

"Yury Dolgoruky is armed with a RSM-56 Bulava SLBM."

Yury Dolgoruky can carry 16 Bulava SLBM, while the improved variants of Borei Class submarines can be armed with up to 20 missiles.

The three-stage missile uses solid fuel propellant for the first two stages and liquid fuel for the third stage. It can be classified as a quasi-ballistic missile because of its low flight trajectory. Bulava features advanced defence capabilities designed to penetrate enemy missile-defence systems. The missile can withstand a nuclear blast at a minimum range of 500m.

The missile has a length of 12.1m and diameter of 2.1m. It has an operational range of 8,000km and is capable of carrying up to ten independently guided, manoeuvrable warheads with an yield of 100-150kt each.

Yury Dolgoruky is fitted with six 533mm torpedo tubes for launching six RPK-2 Viyuga (SS-N-15) missiles. Each SS-N-15 is capable of carrying a payload of a Type 40 torpedo or 90R nuclear depth charge. The missile can strike enemy submarines within a range of 45km, while travelling at a subsonic speed of Mach 0.9.

The Russian Navy has 14 Bars Class project 971 submarines known in the West as the Akula Class nuclear-powered submarines (SSN). A number of Russian Akula class submarines are deployed in the Pacific region.