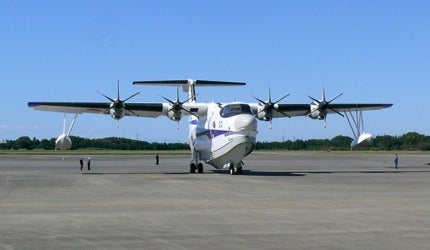 The ShinMaywa US-2 is an amphibious short take-off and landing (STOL) aircraft manufactured by Japan-based ShinMaywa Industries. Designed for air-sea rescue missions, the US-2 is operated by the 31st Fleet Air Wing of the Japan Maritime Self-Defence Force (JMSDF).

The ShinMaywa US-2 fleet is deployed across the remote islands of Japan’s Exclusive Economic Zones to provide surveillance and emergency medical transportation services. The aircraft can quickly reach remote islands and sites of maritime accidents during search and rescue (SAR) operations.

The US-2 amphibian aircraft was displayed at Defexpo India 2012. The aircraft has been offered to India in response to the Indian Navy’s global request for information (RFI) for nine amphibious SAR aircraft. The US-2 is the first Japanese aircraft to be offered to the Indian defence market.

The ShinMaywa US-2 is an amphibious short take-off and landing (STOL) aircraft manufactured by Japan-based ShinMaywa Industries.

The first US-2 commercial production aircraft was delivered to Japan’s Ministry of Defence (MoD) in February 2009. The fifth US-2 was delivered to the Japan Maritime Self-Defence Force in 2011.

In October 1996, ShinMaywa was nominated by the Ministry of Defence as a main contractor to develop advanced version of existing US-1 aircraft. The new aircraft was designated US-1A Kai. ShinMaywa formed a US-1A modification engineering team including Kawasaki Heavy Industries, NIPPI Corporation, and Mitsubishi Heavy Industries. The rigorous engineering requirements imposed on the project resulted in an advanced model which was virtually a brand new aircraft.

The MoD signed a contract for the delivery of the US-1A Kai aircraft in 2005. The prototype was integrated with partial design changes based on the evaluation by the MoD. The US-1A Kai was re-designated the US-2 STOL Search and Rescue Amphibian, and was formally inducted to a squadron in March 2007. The aircraft entered full-scale production in April 2007 and the first flight was accomplished in December 2008.

Design of ShinMaywa US-2 amphibious aircraft

Commander, Fleet Activities Yokosuka (CFAY) is a US Navy forward deployed base in Yokosuka, Japan.

The US-2 incorporates a flexible airframe design allowing it to be converted into a fire-fighting amphibian, passenger transport aircraft, or a multi-purpose amphibian. The wings and fuselage are made of composite materials. It features a pressurised cabin for high-altitude flights. The STOL technology based on boundary layer control (BLC) helps in very-low-speed operations.

Cockpit of the ShinMaywa US-2

The US-2 is equipped with a glass cockpit with integrated instrument panel. A single LCD panel integrates the digitalised meters. The aircraft incorporates fly-by-wire flight control system. The computerised flight system improves the safety and controllability of the aircraft.

The aircraft is equipped with a tricycle type landing gear. The STOL capabilities enable the US-2 to take off and land within very short distances on land and water. The maximum take-off distance required on land is 490m. The spray suppressor and spray strip aboard the US-2 allow the operation in rough seas with wave height of 3m.