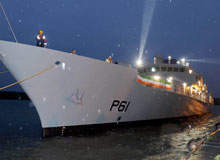 Babcock Marine’s Samuel Beckett Class offshore patrol vessels (OPVs) are being built for the Irish Naval Service as a part of a fleet replacement programme. The OPVs will be primarily deployed in fishery protection, search and rescue (SAR), and maritime patrol missions across the 200-mile Irish Economic Exclusion Zone (EEZ) in the North Atlantic Ocean.

The Department of Defence (An Roinn Cosanta) signed a contract with Babcock Marine in October 2010, for the construction of two new OPVs for the Irish Naval Service at an estimated cost of €108m. The contract also included the option for a third vessel, which was exercised in June 2014.

The keel for the first OPV, LÉ Samuel Beckett (P61), was laid down at Babcock’s Appledore shipyard in May 2012. The vessel was floated out of the drydock in November 2013, arrived at the Naval Base at Haulbowline, Ireland, in April 2014 and was commissioned into service in May 2014. LÉ Samuel Beckett replaced the decommissioned OPV LÉ Emer.

The second OPV in class, LÉ James Joyce (P62), was floated out in November 2014 and commissioned in September 2015. It replaced LÉ Aoife OPV.

The Samuel Beckett OPV features an extended monohull design based on the PV80 design of STX Canada Marine. The OPVs incorporate fin stabilisers and anti-heel tanks for roll and pitch reduction.

The vessel can carry two 8m rigid hull inflatable boats (RHIBs) at either side of the hull, while the third RHIB is housed in a cradle over the stern deck. The boats are launched and recovered by single-point davits and can be operated at a maximum speed of 30k up to Sea State 4.

The OPV has a length of 89.5m, beam of 14m, draft of 3.8m and displacement of 1,900t. It can complement 54 personnel, including a Ships Company of 44, ten trainees and the carriage of containers. Accommodation is provided in single and four berth cabins.

The aft flight deck allows for the operations of unmanned aerial vehicles (UAVs) from the vessel. The deck area can also accommodate three 20ft containers and is provided with a large 5t crane at a 9.56m radius.

The OPV also integrates a 450kW bow thruster and rudders for high manoeuvrability in close-quarter positions. The dynamic positioning (DP) system on board the vessels maintains position and heading. The shipboard electricity is generated by three 630kW alternators, while emergency power is provided by a 320kW generator.

The propulsion system ensures a maximum speed of 23k. The vessels have a range of 6,000nmi at a cruising speed of 15k and are capable of conducting autonomous missions for up to 21 days.