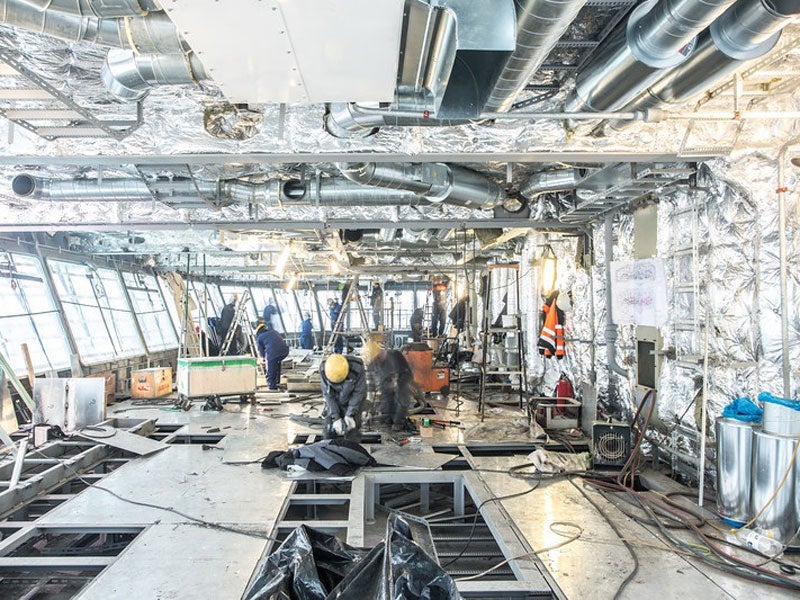 The Resolve-class auxiliary oiler replenishment (AOR) vessel is a retrofit of MV Asterix container vessel to support the Royal Canadian Navy’s at-sea replenishment capability. Delivery of the ship was made in December 2017.

Designed in accordance with Lloyds Register classification standards, the Resolve-class ship is intended to supply ammunition, fuel, food, water, power, and spare parts to the Canadian naval forces at sea. It can also be used for humanitarian assistance and disaster relief missions.

As part of the conversion project, Project Resolve consortium was contracted to rebuild and equip the MV Asterix vessel with naval technology to military specifications.

The Canadian Government awarded a contract to Project Resolve, a consortium of Chantier Davie Canada, Aecon Pictou Shipyard, and NavTech, to begin construction on the AOR ship, in November 2015. The deal also includes service support for a five-year base period with five one-year options for extension.

First steel for the AOR vessel was cut at Davie’s shipyard in Quebec, Canada, in May 2016. The ship was launched in October 2017 and completed sea trials in November 2017. It is based at Canadian Forces Base Halifax in eastern Canada.

The Resolve-class auxiliary oiler replenishment ship features double-hull design with a bulbous bow. It is 182.5m-long, 25.2m-wide, and 9.5m-high, while it has a full load displacement of 26,000t.

The supply ship accommodates 150 crew members and up to 350 humanitarian assistance and disaster relief personnel. Its accommodation section has space for briefing, and conference rooms for command and control functions.

A humanitarian processing area on-board the vessel provides triage and care for evacuees and survivors. The ship also features a large medical facility with two separate wards to house up to 60 patients.

“The Resolve-class ship is intended to supply ammunition, fuel, food, water, power and spare parts to the Canadian naval forces at sea.”

The tween-deck carries two landing craft, vehicle and personnel (LCVP) craft for humanitarian missions, as well as for transportation of personnel, vehicles, and stores.

A large flight deck is provided at the stern to support ship-to-shore airlift operations conducted by two embarked Cyclone CH-148 helicopters, which will be housed in two hangars located next to the accommodation unit.

Up to four Nato STREAM-type replenishment-at-sea masts are installed amidships to refuel and resupply two ships simultaneously at sea in difficult weather conditions.

The supply ship is capable of transporting 10,500m³ of F76 marine diesel fuel, 1,300m³ of F44 aviation fuel, 400t/day of fresh water, 300t of ammunition, and significant power. The fuel will be stored in pre-fabricated tanks featuring triple-protection walls.

A vehicle bay located on tween-deck is intended for carriage of trucks, light armoured vehicles and jeeps. The bow section has a protected containerised storage area for storing 38 containers, including 20 refrigerated, ammunition and supplies. The containers can be loaded or unloaded using two 30t cargo cranes.

The supply ship is outfitted with L-3 MAPPS integrated platform management system (IPMS), which allows the crew to monitor and control the propulsion systems, electrical units, auxiliaries, and damage control machinery on-board the vessel in real-time.

The bridge system also integrates the vessel’s combat management and navigation systems to provide safe and efficient operation of the ship.

The interim auxiliary vessel is powered by MAN B&W engine, driving a fixed propeller. A retractable thruster is mounted to deliver enhanced manoeuvrability and station-keeping capability.

Operating as Chantier Davie Canada, Davie Shipbuilding is the prime contractor for the Resolve-class AOR ship project, while NavTech is the design services provider. Aecon Pictou Shipyard was appointed to perform fabrication work under a subcontract with Davie Shipbuilding, while VShips Canada is the ship manager.

Davie Shipyard awarded an accommodation module construction contract to Almaco Group for the supply vessel in 2015.

Hepburn Engineering won an order from Davie Shipbuilding in August 2015, to provide a replenishment-at-sea system. Chantier Davie Canada and Project Resolve jointly awarded a contract to L-3 MAPPS in September 2015, for the supply of the IPMS.

RaceRocks signed a contract in December 2015 to provide training services for the AOR vessel. Davie Shipbuilding awarded a contract to OSI Maritime Systems to supply and install an integrated navigation and bridge system (INBS) in the Resolve-class supply ship in January 2016.

L-3 MAPPS is a leading global supplier of integrated marine...

OSI Maritime Systems has been providing electronic chart systems to...

USS Abraham Lincoln (CVN 72) is the fifth vessel of the Nimitz-Class nuclear-powered aircraft carriers. The vessel is homeported in Norfolk,…

The Nilgiri-class stealth frigates, also known as Project 17A frigates, are being built by Garden Reach Shipbuilders & Engineers (GRSE)…

17 Dec 2020
Registration is disabled.
We use cookies to ensure that we give you the best experience on our website. If you continue to use this site we will assume that you are happy with it.ContinueLearn more