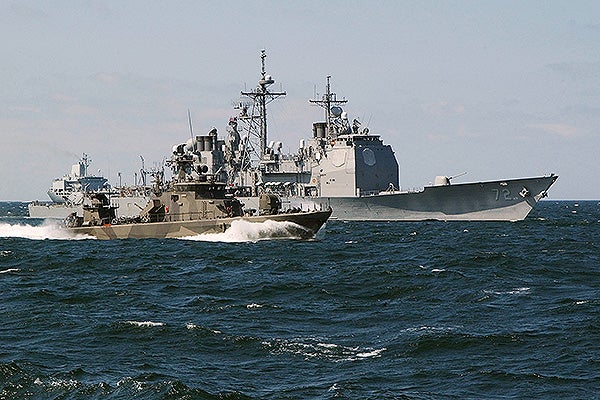 The newly refurbished Rauma Class Fast Attack Crafts (FACs) are in service with the Finnish Navy. Four vessels were built by Hollming yards and Finnyards (now STX Finland) between 1990 and 1992. The Rauma Class is succeeded by Hamina Class missile boats.

Rauma Class ships are operated by the Archipelago Sea Naval Region 6 Missile Squadron and are home-ported at Pansio naval base in Turku, Finland. The vessels can conduct air and surface surveillance, anti-submarine warfare (ASW), and maritime protection.

The first vessel in class, the FNS Rauma (70), was commissioned in October 1990 and was followed by FNS Raahe (71), which entered in to service in August 1991. The third and last vessels, FNS Porvoo (72) and FNS Naantali (73) were commissioned in April and June 1992 respectively.

The Finnish Navy placed an approximately €70m ($96m) contract with Patria for the upgrade of four Rauma Class fast attack crafts in mid-2010. The upgrade allows the boats to remain in service until 2020 and also ensures them to meet the modern requirements of the Finnish Navy.

The Hamina Class fast attack craft were built by Aker Finnyards in Rauma, Finland for the Finnish Navy.

The modernisation of four vessels began in Fall 2010 and was completed at the end of 2013. Patria officially delivered the fast attack boats to the Finnish Navy by March 2014.

The combat management system of the vessels was completely enhanced and integrated with the existing weapons and sensors aboard the boats. The navigation, sonar and anti-submarine warfare systems were completely upgraded under the programme.

The vessel has a length of 48m, beam of 8m and draught of 1.5m. Each boat can complement a crew of 24 personnel and has a displacement of 240t.

The main gun fitted on the bow deck is a Bofors 40mm L/70. It can protect the vessel from hostile craft, aircraft, anti-ship missiles and shore based threats. The attack craft are also fitted with two NSV 12.7mm machine guns.

Six RBS-15 (Finnish designation: MTO85M) long-range anti-ship missiles aboard the Rauma Class can attack enemy warships and land targets. The missile has a speed of 0.9 Mach and range of over 200km. The ASW capability is provided by Saab ELMA ASW-600 mortars. Depth charges can be fitted to the vessels for destroying hostile submarines.

Sensors and radars of Rauma Class

“It can protect the vessel from hostile craft, aircraft, anti-ship missiles and shore based threats.”