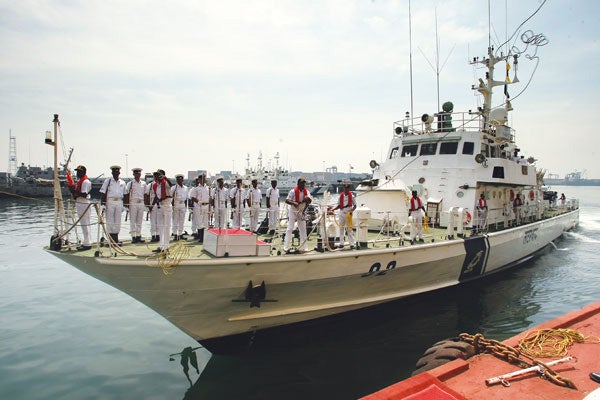 The Rajshree Class Inshore Patrol Vessels (IPVs) are in service with the Indian Coast Guard. Eight IPVs have been indigenously built by Garden Reach Shipbuilders & Engineers (GRSE) shipyard in Kolkata between 2010 and 2013.

The keels for the next three ships in class, ICGS Rajkiran, ICGS Rajkamal and ICGS Rajratan were laid in March 2011. The three IPVs were launched in September 2011 and commissioned into service in August 2012, January 2013 and February 2013 respectively.

The mono-hull design of the IPV features an integrated bridge system and machinery control system. The vessels are designed to conduct patrols and vertical replenishment at up to sea state 5. The IPVs can survive in conditions of up to sea state 8, but their deployment and recovery is limited to sea state 4.

Naval gun system aboard the IPVs

“Each vessel can generate 320kW of electricity to power onboard systems such as sensors, ship equipments and weapons.”

The CRN 91 has a maximum rate of fire of 550 rounds per minute and can engage long range (4,000m) targets with High-explosive Incendiary (HEI) and fragmentation tracer projectiles. The gun is fitted with sighting systems for striking targets either day or night.

The propulsion system consists of three MTU 4000 series engines and three 71S2 Rolls Royce Kamewa water jets. Each engine generates a maximum power output of 2,720bhp (2,028kW). Each vessel can generate 320kW of electricity to power onboard systems such as sensors, ship equipments and weapons.

The propulsion plant provides a maximum speed of 34kt. The vessels can attain a maximum range of 1,500nmi at an economical speed of 16kt. The IPVs have maximum operational ranges of 3,000nmi, but they are generally deployed for inshore missions within 24nmi of the coastline.

The improved speed and seagoing abilities enable the IPVs to intercept vessels such as large offshore fishing trawlers operating illicitly in Indian seas. Each boat is expected to be available for 290 patrol days per year.