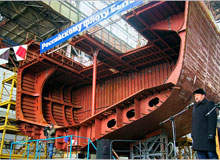 The Project 11356 Admiral Grigorovich Class frigates are constructed at Yantar Shipyard, based in Kaliningrad, for the Russian Navy. The vessels utilise the same design developed for the Indian Navy’s Talwar Class frigates.

The Admiral Grigorovich Class frigates can be deployed in anti-surface warfare (AsuW), anti-submarine warfare (ASW) and anti-air warfare (AAW) missions. They are capable of conducting missions as a single vessel or as part of a task force.

The Russian Ministry of Defence signed two contracts with Yantar Shipyard, between 2010 and 2011, for the construction of six Project 11356 frigates. The keel of the first ship in the series, Admiral Grigorovich, was laid down in December 2010, and the vessel was floated out of dry-dock in March 2014.

The Russian Navy plans to induct the Project 11356 frigates into its Black Sea Fleet.

Design and features of the Admiral Grigorovich Class frigates

The Admiral Grigorovich Class incorporates a stealthy hull design developed by the Severnoye Design Bureau. The hull and superstructures were designed to have low radar, acoustic and infrared signatures. The frigate features a flight deck at aft to carry a Ka-28 or a Ka-31 helicopter.

The Club-N missile system fitted on board the frigate serves as the anti-ship missile. The missiles are launched by an eight-cell 3S-14E under-deck launcher, complemented by a 3R-14N-11356 fire control system and 3C-25E acquisition radar.

Anti-aircraft defence is provided by Shtil-1 medium-range air defence missile system, Igla man-portable surface-to-air missile system and Kashtan air defence missile / gun system, including up to six fire modules, a command module, storage and reloading system, 64 missiles, and 6,000 rounds of 30mm ammunition. The Shtil-1 complex is equipped with a 3S90E launcher and 3R90E1 fire control system. It can simultaneously engage up to 12 targets within a range of 3.5km to 32km.

The main gun fitted on the forward bow deck is an A190E 100mm gun, featuring a 5P-10E fire control system that enables effective tracking and engagement of multiple targets. The А190 naval gun can fire high-explosive (impact fuse) and AA (time fuse) ammunition at a rate of 80 rounds a minute for ranges of more than 20km.

The frigates are also fitted with four WCM 800/5 diesel-alternators, producing 3,200kW electricity for shipboard systems. The propulsion system ensures a maximum speed of 30k and cruising range of 5,000nmi. The vessel can continuously operate for 30 days.

Vitavox
For over 80 years, Vitavox has supplied the UK and...