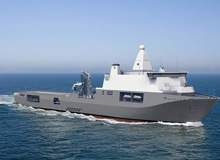 Karel Doorman is a joint logistic support ship designed and built by Damen Schelde Naval Shipbuilding (DSNS) for the Royal Netherlands Navy. The vessel can be used for multiple naval support missions.

The Karel Doorman joint logistic support ship can be deployed to provide strategic sea and logistics support from the sea (seabasing), as well as resupply maritime units at sea. It can also perform helicopter operations, training, humanitarian aid and disaster relief, and repair and maintenance support missions.

The Netherlands’ DMO awarded a contract to DSNS for the construction of the Karel Doorman joint logistic support ship in December 2009.

The keel for the vessel was laid down at the Damen shipyard in Galati, Romania, in June 2011. The ship was launched in October 2012 and shifted to the Vlissingen shipyard for final systems outfitting and commissioning in July 2013.

The IP Company installed a highly advanced communication system, as well as a wireless communication and messaging system (WCMS), in the vessel in August 2013. The system facilitates communication among the crew and provides current status of the vessel. Installation of the integrated sensor and communication suite (GSCS), developed by Thales Nederland, began in January 2014.

The vessel performed platform sea trials in May 2014 and was transferred from DSNS to DMO in July 2014.

The vessel has an overall length of 204.7m, width of 30.4m, height of 53m, and draft of 7.8m. The weight of the empty vessel is 17,200t and the maximum full load displacement is approximately 27,800t. It can carry 175 crew and 125 specialist personnel. It can also accommodate two operating theatres and a quarantine complex.

The vessel is also equipped with two davit-launched landing craft vehicle personnel (LCVP) units. It can carry a 2,350m² roll-on roll-off cargo deck, 7,700m³ of fuel, 400m³ of freshwater and 1,000m³ of helicopter fuel. It is capable of transporting 5,000t of heavy rolling armoured materiel using a crane and lift.

Karel Doorman is equipped with two Goalkeeper autonomous, automatic close-in weapon systems (CIWS) to defend missiles, aircraft and surface ships. The CIWS can fire at a rate of 4,200 rounds a minute.

Bolidt
Bolidt's experience in decking systems and synthetic solutions has been...
SUBSCRIBED