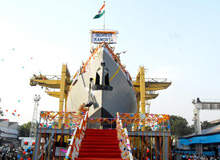 Four of the corvettes constructed under Project 28 (P-28) are scheduled to enter service by 2017. The Kamorta Class succeeds the Kora-Class guided-missile corvettes that are in service with the Indian Navy.

The Kamorta Class corvettes will serve as the frontline warships for the Indian Navy. The primary task of the Kamorta Class will be ASW, while the vessels will also be deployed in anti-surface warfare (AsuW) and anti-air warfare (AAW).

The Indian Navy placed an order for the construction of four indigenous corvettes in 2003. The keel for the lead corvette in class, INS Kamorta, was laid down in November 2006. It was launched in April 2010 and commissioned into the Indian Navy in August 2014. Kamorta experienced engine and steering gear malfunction during trials in October 2013.

The Kamorta Class features a high-tensile indigenous steel hull incorporating a superstructure made of indigenous DMR 249A steel and carbon fibre reinforced plastic (CFRP) materials. The hull and superstructure are designed to achieve a low radar cross-section.

The stealthier hull form is designed to deliver excellent seakeeping and manoeuvrability characteristics while also ensuring lower noise and vibration levels. The ASW corvette includes indigenous content of about 90%.

The corvette has an overall length of 109.1m and breadth of 12.8m. The standard displacement of the vessel is 2,500t. The ship complements a crew of 123 people, including 17 officers and 106 sailors.

The OTO Melara 76mm Super Rapid Gun Mount (SRGM) on the bow deck will deliver a rate of fire of 120 rounds a minute. The gun can fire standard ammunition for a maximum range of 16km.

The RBU-6000 (IRL) anti-submarine rocket launchers and triple torpedo tubes mounted on the vessels ensure the engagement of enemy submarines.

The stern landing deck can support the operation of a single helicopter. The Kamorta Class corvettes are the first Indian Navy ships to be equipped with a rail-less helo traversing system and foldable hangar door.

The shipboard power is provided by four diesel generators supplied by Wartsila. The Kirloskar Engines, the licensee of SEMT PIELSTICK of France, delivered the engines, while raft-mounted gearboxes were supplied by DCNS.

The propulsion system provides a maximum speed of 25k and a range of approximately 3,450nmi at a speed of 18k.