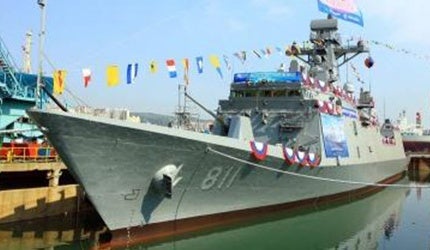 Future Frigate eXperimental (FFX) or Incheon Class frigates are new coastal defence frigates being developed for the Republic of Korea Navy. The ships will be built by Hyundai Heavy Industries (HHI) and Daewoo Shipbuilding and Marine Engineering (DSME).

The Incheon Class frigates can be deployed in multirole operations such as coast patrol, anti-submarine warfare and transport support.

The Republic of Korea Navy placed an order with Hyundai Heavy Industries for the construction of the first FFX vessel in December 2008. The lead ship in class, Incheon, was launched in April 2011. The frigate is expected to be delivered by the end of 2012.

"The new frigates will be equipped with anti-air defence and helicopter landing capabilities."

The FFX programme is intended to replace the ageing fleet of Ulsan Class frigates and Pohang Class corvettes with next generation multimission frigates. The new frigates will be equipped with anti-air defence and helicopter landing capabilities.

The FFX vessels will be built in two batches with an objective of putting up to 15 ships into service by 2020. The first ship of the second batch will be built by DSME.

RENK and Rolls-Royce were contracted to supply the propulsion systems respectively for the first and second batches.

The Incheon Class frigate incorporates a stealth hull design to reduce acoustic and infrared signatures. The vessel has an overall length of 114m, width of 14m and a depth of 25m. The standard displacement of the ship is 2,300t. It can accommodate a crew of 145 to 170.

Command and control of FFX frigates

The command and control system of the FFX is the Samsung Thales NS ICMS (Naval Shield Integrated Combat Management System). The combat system integrates the onboard sensors, weapons and fire control systems.

The Type 053H3 or Jiangwei-II (Nato codename) is a multirole frigate operated by the People’s Liberation Army Navy (PLAN).

The Incheon Class is armed with a SSM-700K Hae Sung (Sea Star) long-range anti-ship missile. The Hae Sung can strike targets within a range of 150km. The Hyunmoo IIIC cruise missiles fitted on the frigate offer a land attack capability to the Incheon Class.

The main gun fitted forward is the 127mm/L62 Mk 45 Mod 4 naval gun. The gun can fire 16 to 20 rounds a minute to an effective range of 24km. The close-point defence is provided by a Phalanx 20mm CIWS (close-in weapon system) and RIM-116B Rolling Airframe Missile (RAM) 21-round launcher.

The countermeasures are provided by a LIG Nex1 SLQ-200K Sonata electronic warfare suite and a KDAGAIE Mk2 decoy launching system.

The FFX frigates have an aft helicopter deck to support the operations of a Super Lynx or SH-60 Seahawk helicopter. The frigate is equipped with an enclosed hangar facility to accommodate up to two medium-lift helicopters.

Propulsion of the South Korean vessels

"The propulsion system provides a maximum speed of 30kt and a cruising range of about 8,000km."

The propulsion units are supplied by DOOSAN Heavy Industries, the prime contractor of the propulsion gear for the FFX. Each vessel in the second batch will be equipped with a single MT30 gas turbine delivering a power output of 36MW to 40MW. MT30 is the most powerful marine gas turbine in the world.

The propulsion system provides a maximum speed of 30kt and a cruising range of about 8,000km to the Incheon Class frigates.