The CUSV has a maximum towing capacity of 5,000lb. Image: courtesy of US Navy, by mass communication specialist seaman Scott Youngblood.

The unmanned vessel can endure at sea for more than 24 hours.

The Textron CUSV has a cruising range of 1,200nm. 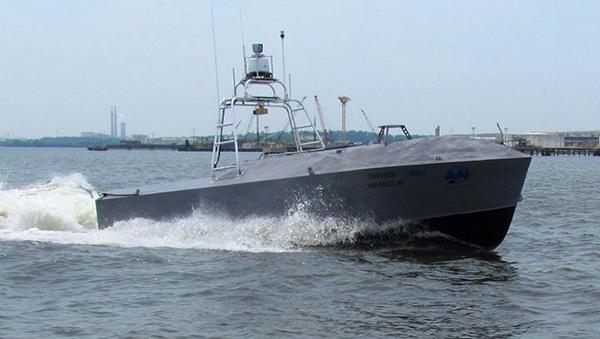 The CUSV can be deployed from Freedom and Independence-class littoral combat ships (LCS) to execute a range of missions that include mine warfare, anti-submarine warfare, communications relay, intelligence, surveillance and reconnaissance (ISR), anti-surface warfare, and UAS / UUV launch and recovery operations.

The vessel has completed more than 1,800 hours of in-water operation as of October 2014.

LCS is the first of a new family of surface ships for the US Navy.

Textron received a $33.8m contract from the US Navy in October 2014 to provide a CUSV for the Unmanned Influence Sweep System (UISS) programme. The contract requires Textron to design, develop and qualify the UISS and its common command and control software under 30-month engineering, manufacturing and development (EMD) phase.

General Dynamics Robotic Systems (GDRS) was also awarded an $8.5m contract by the US Navy Space and Naval Warfare Systems Center (SPAWAR) in May 2006 to design and integrate two USVs for the LCS anti-submarine warfare mission module. GDRS received a $12.7m contract for four USVs in October 2006. The first Fleet-class ASW USV (11MUC0601) was delivered in May 2008 and the second vessel was delivered in mid-2008.

The unmanned vessel has self righting capability and offers high maintainability, as well as reliability. It is equipped with an autonomous launch, tow and recovery system. It is compatible with both LCS configurations, with a length of 39ft, a beam of 10.25ft, draft of 2.2ft and towing capacity of 5,000lb at speeds of 10k.

"The Common Unmanned Surface Vessel is equipped with a large, versatile payload bay, which is 14ft-long, 6ft-wide and 3.5ft-high."

The Common Unmanned Surface Vessel is equipped with a large, versatile payload bay, which is 14ft-long, 6ft-wide and 3.5ft-high. The payload bay can be integrated with side-scan sonar, intelligence, surveillance and reconnaissance (ISR) payload, mine neutralisation module, and non-lethal weapons. A camera / radar mast is fitted to provide improved surveillance and target acquisition.

The Fleet-class CUSV is controlled by a single operator from a maritime common command and control system developed by AAI Unmanned Aircraft Systems. The system is compatible with Harris SeaLancet long-range data link, which enables transmission of payload data between the vessel and the control station.

The control system is compliant with Nato Standardization Agreement (STANAG) 4586, as well as the Joint Architecture for Unmanned Systems (JAUS) protocol.

The improved propulsion systems provide the CUSV a top speed of around 28k, with a cruising range of 1,200nm. It is capable of executing missions for more than 24 hours. The propulsion systems also provide superior stability in adverse weather and conditions up to sea state 4.