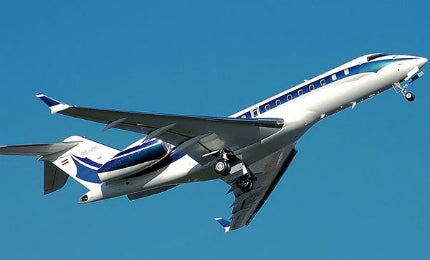 The new generation ELI-3360 maritime patrol aircraft (MPA) designed by ELTA Group, a subsidiary of Israel Aerospace Industries (IAI), was introduced in February 2015. The aircraft is based on the Global 5000 business jet developed by Bombardier Aerospace.

The A319 MPA is a long range maritime patrol and ASW aircraft developed by Airbus Military. The aircraft can be deployed in anti-submarine and anti-surface warfare, intelligence, reconnaissance and surveillance missions.

The ELI-3360 maritime patrol aircraft features a modular design. It offers multi-mission support and maritime superiority over a wide area, under all weather conditions. It can be deployed quickly and can be operated autonomously.

The base version has a length of 29.5m, wing span of 28.7m, height of 7.7m, and wing area of 94.9m². It features swept wings, winglets and a vertical T-tail and is attached with tricycle-type landing gear. The MPA in business-jet configuration is manned by two pilots and two observers.

State-of-the-art surveillance and reconnaissance systems are included on the aircraft to provide enhanced, real-time maritime situational awareness, as well as to offer better flight endurance and extended range.

The ELI-3360 MPA can be equipped with a variety of weapon systems, such as torpedoes and anti-ship missiles for effective ASW and ASuW operations.

Sensors onboard the ELI-3360 MPA

The ELI-3360 MPA is equipped with the advanced, multi-mode ELM-2022 maritime surveillance, imaging and tracking radar and the ELL-8385 ESM / ELINT system, both developed by ELTA Systems.

Command and control features of the ELI-3360

The integrated multi-mission command and control suite onboard the ELI-3360 maritime patrol aircraft helps to monitor and control the flight planning, surveillance equipment, and armament. It incorporates a weapon and stores management system to control the under-wing weapons.

Also fitted on the command and control unit is flexible, multi-purpose, and interchangeable operator workstations, with two to four mission operators. The unit receives real-time flight data through data links, and delivers the same to the users and network-centric warfare system.

Engine and performance of the maritime patrol aircraft

The base variant is powered by two Rolls-Royce Deutschland BR710A2-20 turbofan engines, which generate a thrust of 14,750lb each. It can fly at a typical cruise speed of 902km/h. The maximum speed is 934km/h, and a range of 9,630km is offered.