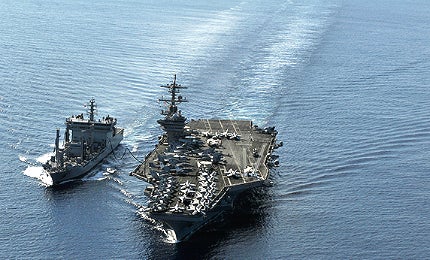 Deepak Class can also be deployed in the transportation and supply of ammunitions, materials and provisions, as well as Humanitarian Assistance and Disaster Relief (HADR) operations.

Fincantieri emerged as a winner in a competitive bidding, involving leading international players, to build two fleet tankers for the Indian Navy in October 2008. The company was awarded a €139m ($180m approximately) contract, including an option for the second vessel. The option was exercised by the Indian Navy in August 2009.

"Deepak Class can also be deployed in the transportation and supply of ammunitions, materials and provisions."

The construction of Deepak Class tankers was carried out by Fincantieri at its Muggiano Shipyard and Sestri Ponente. The builder implemented state-of-the-art ship construction technologies and processes to deliver the ships on schedule.

The first ship in the class, INS Deepak (A 50), was launched at Fincantieri’s Muggiano yard in February 2010. Deepak was commissioned into the Indian Navy in January 2011.

The construction of the second ship in class, INS Shakti (A 57), started at Fincantieri’s Sestri Ponente shipyard in November 2009. The vessel was launched in October 2010 and was inducted into the Indian Navy’s service in October 2011.

The ship incorporates a double hull design integrating state-of-the-art bridge and flag bridge, as well as replenishment systems and two operations rooms. The ship can accommodate 248 personnel, including crew and additional troops. Deepak Class has an overall length of 175m, moulded breadth of 25m and a depth of 19.3m. The full load displacement of each ship is 27,500t.

Deepak Class is equipped with storage facilities for carrying more than 15,000t of liquid cargo, including diesel oil, aviation fuel and fresh water.

"The deck of Deepak Class vessels allows the operations of medium weight helicopters of up to 10t."

The vessels also offer large storage space to accommodate up to 500t of solid cargo, including food stores and ammunition. The ships feature state-of-the-art cargo handling equipment, such as a deck crane with 30t capacity. The cranage allows for the transfer of heavy solid cargo at sea.

The double hatches aboard the tankers allow the refuelling of four vessels simultaneously. The double hull design ensures protection of fuel tanks to avoid the risk of pollution in case of collision or damage. The ship complies with the new Marpol regulations of the International Maritime Organization (IMO) for the prevention of pollution of the marine environment by ships.

Aircraft support and onboard weaponry

The deck of Deepak Class vessels allows the operations of medium weight helicopters of up to 10t. The ship will accommodate helicopters, such as Sea King and HAL Dhruv, that are operated by the Indian Navy. It also provides hangar facility for embarked aircraft.

Deepak Class is armed with four AK-630 close-in weapon system (CIWS) for close-point defence against low flying aircraft and smaller surface vessels. The AK-630 CIWS can fire at a rate of 4,000 to 10,000 rounds a minute. The gun fire is controlled by a high-tech fire control system.

The ship is powered by two 9,600kW diesel engines driving a controllable pitch propeller through a single shaft. The engines are equipped with automatic engine controls. The propulsion system provides a top speed of 20kt and a maximum range of 10,000 nautical miles at 16kt speed.

The Sukanya Class offshore patrol vessels are in service with the Indian Navy.

Car Nicobar Class fast attack craft (FAC) of the Indian Navy were built by Garden Reach Shipbuilders and Engineers (GRSE) in Kolkata, India, between 2007 and 2011.