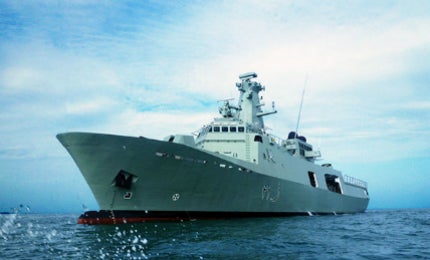 The vessels are intended to perform a range of maritime and homeland security missions such as surveillance and extended patrols in the Sultanate exclusive economic zone (EEZ).

The Royal Navy accepted two of four Al-Ofouq class patrol vessels, designed and built by ST Marine, by September 2015. The final vessel was delivered to the Royal Navy of Oman in June 2016.

Orders and deliveries of Al-Ofouq vessels

"The vessels are intended to perform a range of maritime and homeland security missions such as maritime surveillance and extended patrols."

ST Marine was awarded a €534.8m (approximately $700m) contract by the Ministry of Defence of the Sultanate of Oman through a competitive international tender, to design and construct four Al-Ofouq-class patrol vessels in April 2012. The contract includes a provision for associated logistic support.

The keel for the first patrol vessel was laid in March 2013 and the vessel was launched in January 2014. It was named RNOV Al Seeb in October 2014 and accepted by the Omani Navy in March 2015.

The Al-Ofouq vessel is based on ST Marine’s Fearless class patrol vessels, built for the Singapore Navy. The vessel has an overall length of 75m, waterline length of 72m, draught of 3.3m, breadth of 10.8m and displacement of 1,250t.

The vessel can carry 60 members and is equipped with a flight deck to support the operation of one helicopter or one unmanned aerial vehicle. It is capable of carrying two rigid-hulled inflatable boats (RHIBs) for boarding operations.

A lightweight, rapid-fire naval gun, designed and manufactured by Oto Melara, allows the vessel to engage shore-based targets. The vessel can be armed with secondary guns and torpedoes.

The patrol vessel is operated and controlled from an on-board integrated bridge, which is equipped with navigation systems, multifunctional workstations and a standardised human machine interface.

Al-Ofouq vessels are equipped with the Variant lightweight, multi-purpose, short-to-medium range 2D air and surface surveillance radar, which is capable of operating in both X-band and C-band and offers a low probability of interception.

The vessel uses Thales Nederland’s STIR 1.2 EO Mk2 radar and EO tracking system, operating in both I and K-bands, for gun and missile fire control. It is also fitted with Thales’ Vigile electronic support measures (ESM).

The Al-Ofouq class vessel is powered by two 20V 8000 M91 combined diesel or gas engines with a power output of 9,100kW each. It is installed with two controllable pitch propellers.

The vessel has a maximum speed of 25kt and a range of approximately 3,000nm at a speed of 16kt.

Thales Nederland was awarded a contract by ST Marine to supply and install sensors and a combat management system for the Al-Ofouq class patrol vessels in July 2012.

Raytheon’s German subsidiary Raytheon Anschuetz was selected to provide new-generation integrated bridge and navigation systems for the vessels in April 2013.

Thales is a global technology leader for the aerospace, space,...