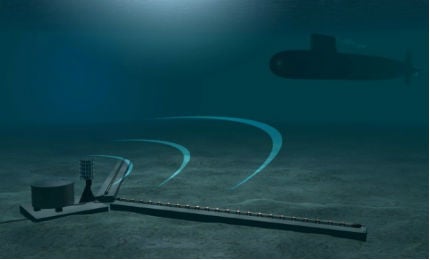 Designed to serve as a long range underwater warning system against the threat of submarines and smaller submersibles, the SeaShield is installed along critical coastlines, maritime borders and at harbor entrances. Its combined active and passive sonar arrays provide a real-time situational picture of the underwater protected area.

The SeaShield is comprised of an active transmit array, large passive receive arrays and an electronic unit installed on the sea bed. The system’s two long receive array strings are composed of multiple hydrophones that pick up the signals returning from underwater objects. The SeaShield supports automatic classification that distinguishes between submarines and other underwater objects. The system sounds an automatic alert siren the moment that a submarine or mini-sub is detected and classified. The underwater threat is continuously tracked by the system and its exact position data is displayed on the screen.

Naval monitoring of the underwater surroundings along their coastlines translates to better security for the navy’s own ships and vessels. In case of alert the navy is also capable of sending its special anti-submarine warfare (ASW) responders to the exact location of the unidentified submarine.

DSIT Solutions Ltd has won a tender to supply an undisclosed navy with its Portable...

DSIT Solutions has signed a contract with a well-respected undisclosed Asian navy for the supply...

DSIT displays ASW kit in Asia for the first time