The Pakistan Navy has reportedly carried out a live weapon firing of its indigenously built Harbah naval cruise missile in the North Arabian Sea.

The naval cruise missile is a surface-to-surface weapon that possesses land attack capabilities.

It is said to have been launched from the Navy’s recently commissioned fast-attack craft, PNS Himmat.

In a statement, the Pakistan Navy was quoted by the Press Trust of India as saying: “The missile is capable of hitting its target from surface to surface and ground assault.” 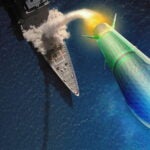 “The successful live weapon firing has once again demonstrated the credible firepower of the Pakistan Navy and the impeccable level of indigenisation in high-tech weaponry achieved by Pakistan’s defence industry.”

The Pakistan Navy previously carried out the commissioning and induction of the 63m-long PNS Himmat in July last year at its dockyard in Karachi.

The vessel was constructed by Karachi Shipyard & Engineering Works (KS&EW).