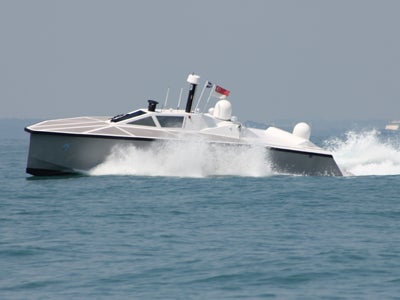 During the development phase, the LongRunner vessel has successfully completed in-water testing off Singapore waters and travelled a total of 2000nm over 24 months.

Capable of being operated from base to base and independent of a mother ship, the 16.5m-long IUSV features Arovex advanced composite material and allows more payload and fuel for enhanced range and operational capabilities.

Zycraft’s president, James Soon, said that the Vigilant IUSV has been designed to be very effective in above-water maritime surveillance and could be the nexus for widespread USV employment.

"The IUSV is also capable of collision avoidance and can certainly take care of itself," Soon said.

In order to provide enhanced situational awareness to a shore base, the unmanned system is fitted with radar, electronic support measures (ESM), and electro-optic sensors as well as automated identification system (AIS).

"The IUSV is capable of collision avoidance and can certainly take care of itself."

"Several of these IUSVs can effectively cover hundreds of miles of coastline for border protection," Soon continued.

With an endurance capacity exceeding 1200nm, the IUSV can be used to conduct missions including coastal security, search and rescue, and maritime logistics for nations with large exclusive economic zone.

Navies with the IUSV concept do not need to construct bigger ships to carry small USVs, but instead can depend on the size of the bigger IUSV to have high endurance and carry the needed payloads, according to Zycraft.

Currently, Zycraft is working with several vendor partners to develop sensor technologies to further enhance the ability of the IUSV roles.