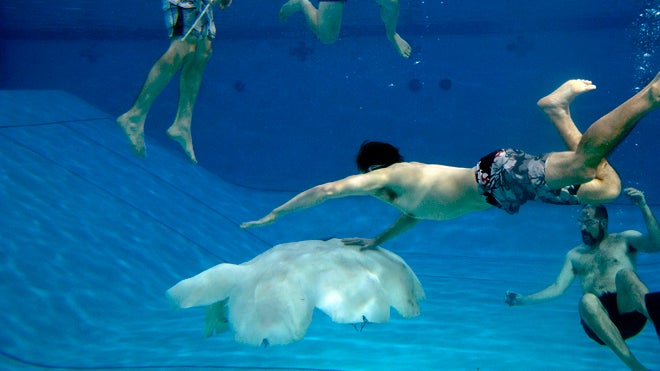 Researchers from Virginia Tech College of Engineering have developed a new autonomous robotic jellyfish prototype, known as Cyro, for performing underwater surveillance for the US Navy.

Weighing 170lb, with size of 5ft by 7in, the larger robotic model has been designed as part of a nationwide multi-university $5m project led by Shashank Priya professor in the Department of Mechanical Engineering at Virginia Tech.

The project aims to develop self-powering, autonomous machines that support various missions such as surveillance and monitoring the undersea environment, as well as studying ocean life, mapping ocean floors and monitoring ocean currents.

Modelled based on a real giant jellyfish Cyanea capillata, the Cyro robotic prototype follows an earlier smaller, hand-sized version of the robot, known as RoboJelly, which is currently under construction by the same research team.

Powered by a rechargeable nickel metal hydride battery rather than tethered used for smaller models, Cyro has undergone powering trials using hydrogen and is scheduled to undergo further trials.

"The tests are aimed at evaluating whether the robot can operate on its own for several months in oceans, while also eliminating the need to recharge."

The tests are aimed at evaluating whether the robot can operate on its own for several months in oceans, while also eliminating the need to recharge.

Currently, the team is developing ways to reduce power consumption, improve swimming performance and better simulate the morphology of the natural jellyfish, to enable researchers to understand how their propulsion mechanism works.

In addition, researchers are studying on a bio-inspired control system to eventually replace the current simplified controller of the robotic jellyfish.