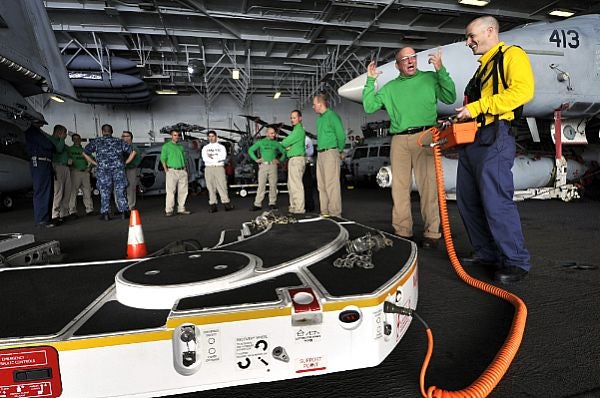 During the final phase of suitability testing, MANTIS assisted sailors in moving the helicopter while responding to sailor’s commands on a control panel of joysticks and toggle switches.

MANTIS has been designed to provide a sleek, low profile for the navy which is 5in lower than the previous model, while the SHH-ELP can operate underneath any current, low-sitting modifications when installed to the Sikorsky-built MH-60R or MH-60S Sea Hawk helicopters.

Further design modifications will be conducted on the new system based on the feedback received by sailors aboard Truman, the first sea platform for MANTIS final phase of suitability testing.

"We want to know what the crew likes, what they do not like, and what improvements can be made to the system."

The Naval Air Systems Command (NAVAIR) support equipment test and evaluation branch lead project engineer John Simone said: "We want to know what the crew likes, what they do not like, and what improvements can be made to the system."

The new MANTIS design is scheduled to undergo fleet wide evaluation, following which it will be deployed throughout the navy.

At present, the crew is verifying the new MANTIS capability for operational environment, Simone added.

Prior to installing onboard Truman, MANTIS had completed rigorous, land-based testing to demonstrate its capability to avoid any potential obstacle aboard a carrier.

Capable of cruising at a maximum speed of more than 30k, the Nimitz-class nuclear-powered aircraft carrier has a full-load displacement of 102,000t and can carry a crew of 6,000.