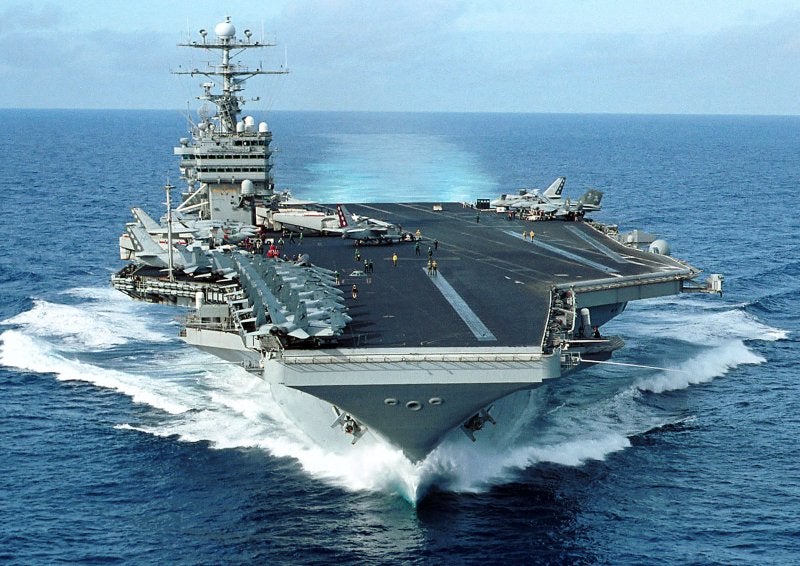 The ship’s critical fire-fighting and washdown system uses a mixture of sea water and aqueous film forming foam (AFFF) to fight against aircraft and ordnance fires by cutting off the fire’s oxygen supply.

Antonio Garcia, Los Angeles damage controlman 3rd Class, said the AFFF countermeasure washdown system would be tested to ensure that all of the systems are in proper working order before the start of every cruise.

"Each quarter we ensure that each system having to do with our countermeasure washdown systems are functional, from our bilge sprinklers, hangar bay sprinklers and our weapons elevators," he said.

"Instead of flooding the spaces with AFFF, we recirculate the solution as we run the tests to ensure everything is in working order."

A concentration of 94% water and 6% AFFF is sprayed over every square foot of the ship’s three hangar bays and exterior skin following, which the crew used sea water to hose the deck down for scrubbing during the test.

Sailors used foul weather suits, as well as gloves and eye protection, to ensure prevention from AFFF, which may prove hazardous when left on the skin for too long during scrubbing.

The washdown system has been designed to protect crew against chemical, biological, and radiological (CBR) attacks onboard ship’s flight deck and in the hangar bay by washing any contaminant from the ship’s skin before entering the ship.

The USS George Washington has completed a six-month routine maintenance period and is undergoing sea trial to validate its every procedure and piece of equipment, as well as completing each department’s unique check-off list to ensure mission readiness.