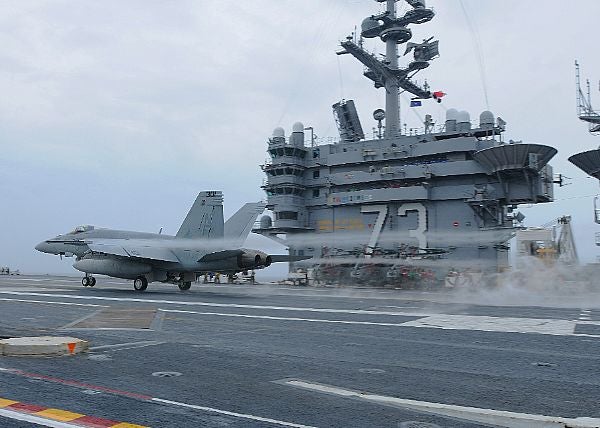 US Naval Forces Japan Commander assistant chief of staff for operations, plans and training captain Dennis Mikeska said that the pilots conducted missions in a simulated environment that included landing on the flight deck of an aircraft carrier.

"Landing on an aircraft carrier is one of the most challenging exercises that a naval aviator can face," Mikeska said.

The FCLP day and night training is aimed at improving skills of CVW 5 pilots to conduct aircraft operations onboard the Japan-based nuclear-powered Nimitz-class aircraft carrier at sea.

"This is necessary training to be able to improve response time especially being forward-deployed," Mikeska said.

Prior to performing FCLP, each pilot received multiple passing grades from landing signal officers, validating their ability to maintain centerline, approach at correct glide slope, maintain aircraft attitude and to follow direction during touch and go landing during the day and night.

Capable of accommodating more than 6,000 personnel and cruising at a maximum speed of over 30k, the 317m-long Nimitz-class vessel is armed with Raytheon GMLS Mk29 eight-cell launchers for Nato Sea Sparrow surface-to-air missiles.