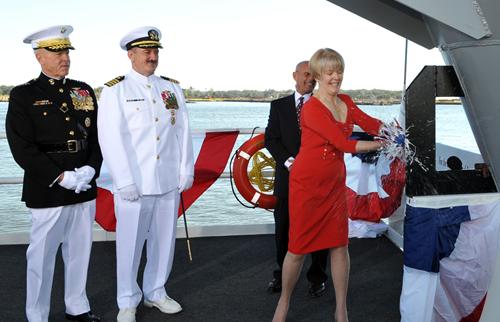 HII LHA 6 programme manager George Jones said the ship performed well, and the team will ensure LHA 6 will be prepared for acceptance trials.

In addition to conducting all required sea trial evolutions including the operation of the gas turbine / electric-powered propulsion system, USS America performed its anchor handling, flight operations and combat systems’ evaluations, as part of the trials.

The Program Executive Office, ships amphibious warfare programme manager, captain Chris Mercer, said: "Our joint government and industry team comprehensively tested every aspect of the ship’s equipment and systems, and the results leave us with a clear path to a successful acceptance trials and delivery next year."

"The results leave us with a clear path to a successful acceptance trials and delivery next year."

USS America is scheduled to undergo acceptance sea trials in late January, to demonstrate its capability to the US Navy’s Board of Inspection and Survey (INSURV).

The 844ft-long and 106-ft-wide America-class ships will support a range of missions including humanitarian, disaster relief, maritime security, antipiracy and other operations while providing air support for ground forces.