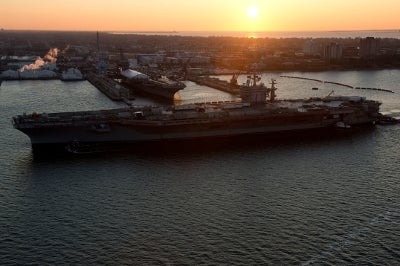 Huntington Ingalls Industries (HII) has been awarded a $2.6bn cost-plus-incentive-fee contract by the US Navy for refuelling and complex overhaul (RCOH) of the fifth Nimitz-class nuclear-powered aircraft carrier, USS Abraham Lincoln (CVN 72).

Under the RCOH contract, the company will refuel the ship’s reactors and perform extensive modernisation work on more than 2,300 compartments, 600 tanks and hundreds of systems.

The RCOH also includes upgrades to the flight deck, catapults, combat systems and the island to recapitalise the ship for the latter part of its 50-year service life.

NNS in-service aircraft carrier programmes vice president Chris Miner said: "Our focus will continue to be on the task at hand: modernising and improving upon Lincoln’s capabilities for another 25 years of successful service."

During RCOH, the 102,000t USS Abraham Lincoln will also receive the Joint Strike Fighter (JSF) modifications and is expected to return to the fleet in 2017.

"Our focus will continue to be on the task at hand: modernising and improving upon Lincoln’s capabilities for another 25 years of successful service."

Following completion of the modernisation programme, the aircraft carrier is expected to be a technologically advanced Nimitz-class aircraft carrier and will continue to form a vital part of national defence.

Capable of accommodating over 6,000 personnel and cruising at a maximum speed of over 30k, the 317m-long Nimitz-class ships are armed with three Raytheon GMLS Mk29 eight-cell launchers for Nato Sea Sparrow surface-to-air missiles.

The aircraft carrier’s RCOH programme was delayed by six weeks due to defence budget uncertainties and a lag in funding for the work.

Scheduled to start immediately, work under the contract is due for completion in November 2016.