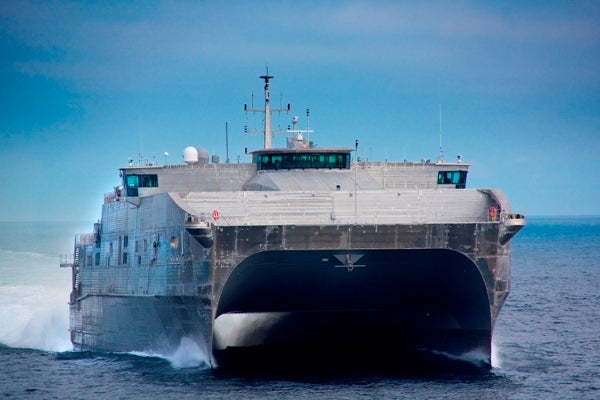 The trials involved over 50 demonstrations, during which the ship’s major systems were tested and validated in preparation for final inspection by the US Navy before delivery.

During the trials, first-of-class standardisation and manoeuvrability was demonstrated, and the ship reached maximum speed in excess of 35k while validating the ship’s four steerable waterjets.

In November 2008, the US Navy awarded a contract to Austal to construct first JHSV, with options to build nine additional vessels between 2009 and 2013 worth over $1.6bn.

The Navy had recently awarded a $321.7m contract to Austal for the construction of the eighth and ninth JHSVs.

The 338ft-long aluminum catamaran warship, USNS Spearhead (JHSV 1) can transport 600t a distance of 1,200nm and is currently undergoing construction by Austal at Mobile, Alabama, US.

The Spearhead vessel can operate in shallow-draft ports and waterways, and is used for day and night air vehicle launch and recovery operations.

The Austal JHSV team includes General Dynamics Advanced Information Systems, which is responsible for the design, integration and testing of the ship’s mission systems, including internal and external communications, electronic navigation, and aviation and armament systems.

The first JHSV will be designated as a US naval ship on its delivery to the US Navy Military Sealift Command (MSC).

The Choctaw County (JHSV 2) is in final stage of construction while JHSV 3 recently entered the final assembly phase in Mobile, Alabama, US, following completion of its modules.