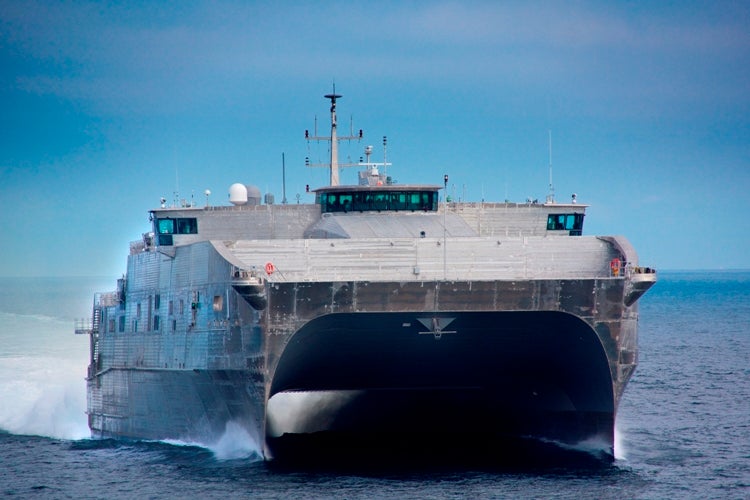 The US Navy’s first of ten joint high-speed vessels (JHSVs), USNS Spearhead, has successfully completed acceptance trials (AT) off the Gulf of Mexico, marking the final milestone achieved prior to its delivery.

During various sea trial, USNS Spearhead validated its performance with the ship’s major systems and equipment, such as the propulsion plant, ship handling and auxiliary systems.

Austal USA Operations senior vice president Craig Perciavalle: "I consider it a major accomplishment to be authorised by the navy to hang a broom from the mast, a navy tradition representing a ‘clean sweep’ of trial events, after completing our first acceptance trials as prime contractor."

Austal USA interim president and chief financial officer Brian Leathers added that the new class of vessels would support national security needs of the US.

"I consider it a major accomplishment to be authorised by the navy to hang a broom from the mast after completing our first acceptance trials as prime contractor."

The company was awarded a $1.6bn contract in November 2008 to build the first JHSV, with options for an additional nine vessels between 2009 and 2013.

The first high-speed catamaran transport ship is scheduled for delivery to the navy over the next few months.

Choctaw County (JHSV 2), the second of ten JHSVs, is due for christening on 15 September, while two other vessels are currently under construction at Austal’s facility in Mobile, Alabama.

Capable of operating in shallow-draft ports and waterways, the 338ft-long Spearhead vessel can be used for day and night air vehicle launch and recovery operations.

The Austal-led JHSV team includes General Dynamics Advanced Information Systems, which has overseen the design, integration and testing of the ship’s electronic systems including the combat system, networks, and seaframe control.