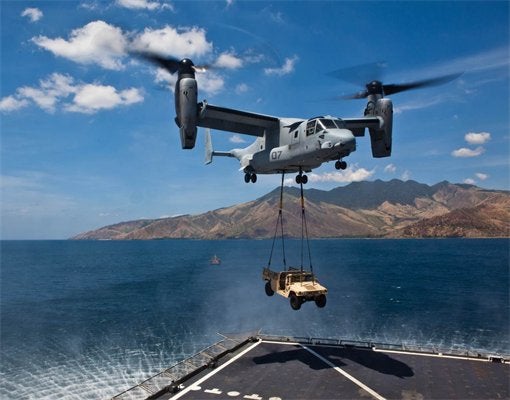 Conducted as part of Exercise Balikatan 2013, the trials were intended to demonstrate Osprey’s cargo lifting and passenger transfer capabilities that will help the Marine Air-Ground Task Force (MAGTF) to plan for future lift operations from ship to shore.

During the flight operations, the Osprey lifted the high-mobility multipurpose wheeled vehicle (HUMVEE) for the first time off the ship.

Okinawa-based Dragons of Marine Medium Tiltrotor Squadron VMM-265 Marine Corps pilots, who operated the aircraft, also familiarised themselves with its other capabilities.

"This is our first MV-22 landing, fuelling, cargo and passenger transfer."

Bell Boeing-built MV-22 Osprey aircraft has been designed and integrated with the operational capabilities of a conventional helicopter with the long-range, high-speed cruise performance of a turboprop aircraft.

The aircraft’s missions include transportation of troops, equipment, and supplies from ships and land bases for combat assault and assault support.

USNS Sacagawea been designed to provide underway replenishment services with logistic lift from sources of supply in port or at sea, as well as transfer of cargo to battle groups, station ships, shuttle ships and other naval ships at sea.

Scheduled to be held from 5-17 April, Exercise Balikatan 2013 is an annual military bilateral training exercise held between the Republic of the Philippines and the US, aimed at enhancing humanitarian assistance capability.

Image: An MV-22 Osprey lifts a Humvee off from the amphibious assault ship. Photo: courtesy of US Marine Corps, Pfc Kasey Peacock/Released.

25 Feb 2021
Registration is disabled.
We use cookies to ensure that we give you the best experience on our website. If you continue to use this site we will assume that you are happy with it.ContinueLearn more