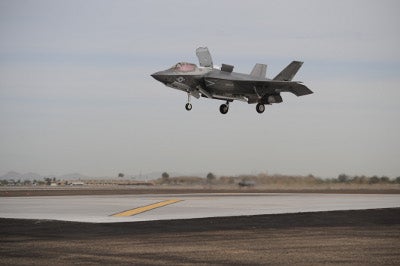 Designed and developed in collaboration with Northrop Grumman and BAE Systems, the Lockheed Martin-built F-35 JSF aircraft can perform takeoffs from smaller amphibious warfare vessels, as well as landings on improvised airstrips.

"VMFA-121 is scheduled to receive additional F-35s throughout the next eight to 12 months, reaching a total of 16 aircraft by late-2013."

In addition to replacing the USMC’s AV-8B Harrier and F-18 Hornet aircraft, the other JSF variants will replace US Air Force’s (USAF) existing F-16 Fighting Falcon and A-10 Thunderbolt II fleet, as well as McDonnell Douglas F/A-18 Hornet aircraft for the US Navy.

The first F-35B squadron to join Marine Aircraft Group 13, VMFA-121 is scheduled to receive additional F-35s throughout the next eight to 12 months, reaching a total of 16 aircraft by late-2013.

The UK Ministry of Defence (MoD) is planning to buy up to 138 F-35B JSF aircraft for the Royal Air Force and the Royal Navy.